Kevin Patrick Smith (born August 2, 1970) is an American filmmaker, actor, comedian, comic book writer, author, and podcaster. He came to prominence with the low-budget comedy film Clerks (1994), which he wrote, directed, co-produced, and acted in as the character Silent Bob of the duo Jay and Silent Bob. Jay and Silent Bob have appeared in Smith's follow-up films which were set primarily in his home state of New Jersey. The films frequently featured crossover plot elements and character references. He has a production company View Askew Productions, which he co-founded with Scott Mosier.

Since 2011, Smith has mostly made films in the horror genre. He has also served as a director-for-hire for material he did not write, including the buddy cop action comedy Cop Out (2010) and various television series episodes. Smith is also the owner of Jay and Silent Bob's Secret Stash, a comic book store in Red Bank, New Jersey.

He hosts the movie-review television show Spoilers. As a podcaster, Smith co-hosts several shows on his own SModcast Podcast Network. Smith is well known for participating in long, humorous Q&A sessions that are often filmed for DVD release, beginning with An Evening with Kevin Smith. 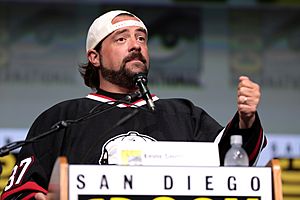 Kevin Patrick Smith was born in Red Bank, New Jersey, the son of Grace (née Schultz), a homemaker, and Donald E. Smith, a postal worker. He has an older brother and sister. He was raised in a Catholic household, in the nearby clamming town of Highlands.

As a child, Smith's days were scheduled around his father's late shifts at the post office. His father grew to despise his job, which greatly influenced Smith, he vowed never to work at something that he did not enjoy.

Smith later attended Henry Hudson Regional High School, where as a B and C student, he would videotape school basketball games and produce sketch comedy skits in the style of Saturday Night Live. After high school, Smith attended The New School in New York, but did not graduate. 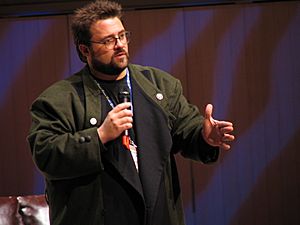 On his 21st birthday, Smith went to see Richard Linklater's comedy Slacker. Smith, impressed by the fact that Linklater set and shot the film in his hometown of Austin, Texas rather than on a sound stage in a major city, was inspired to become a filmmaker, and to set films where he lived. After that he built himself a library of independent filmmakers like Linklater, Jim Jarmusch, Spike Lee and Hal Hartley to draw from.

Smith attended Vancouver Film School for four months, where he met longtime collaborators Scott Mosier and Dave Klein but left halfway through the course in order to save money to make his first film. 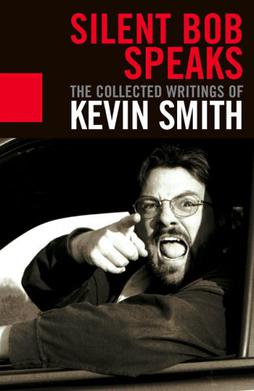 Smith has been a regular contributor to Arena magazine. In 2005, Miramax Books released Smith's first book, Silent Bob Speaks. His second book was another collection of previously published essays and reached No. 32 on The New York Times Best Sellers List. His Smith's third book was released on September 29, 2009.

He has been a lifelong comic book fan and in 1999, Smith wrote "Guardian Devil", an eight-issue story arc of Daredevil for Marvel Comics. Smith followed this by producing a 15-issue on Green Arrow for DC Comics that saw the return of Oliver Queen from the dead and the introduction of Mia Dearden, a teenage girl who would become Speedy. Smith returned to Marvel for two mini-series: Spider-Man/Black Cat: The Evil That Men Do and Daredevil/Bullseye: The Target, both of which debuted in 2002. 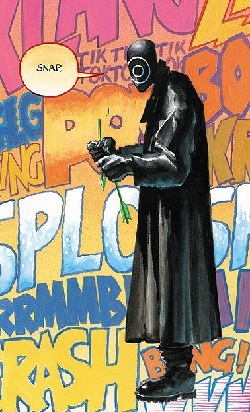 Onomatopoeia is a supervillain, usually as an enemy of Green Arrow and Batman. Created by writer Kevin Smith

After the success of his first films, Smith lived in Los Angeles, though he missed being near his New Jersey friends. When Smith's grandmother became ill, he returned to Red Bank and remained there, realizing that that was where he belonged.

Smith is married to Jennifer Schwalbach Smith. They got married at Skywalker Ranch on April 25, 1999. Their daughter, Harley Quinn Smith, was born June 26, 1999, and was named after the character from the Batman comics. They live in the Hollywood Hills, in a house Smith purchased from longtime friend Ben Affleck in 2003. 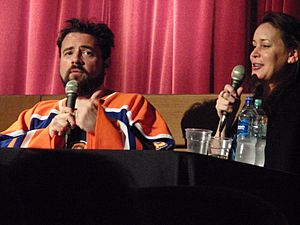 Smith is an avid hockey fan and loyal New Jersey Devils fan. He is also a fan of the Edmonton Oilers.

All content from Kiddle encyclopedia articles (including the article images and facts) can be freely used under Attribution-ShareAlike license, unless stated otherwise. Cite this article:
Kevin Smith Facts for Kids. Kiddle Encyclopedia.