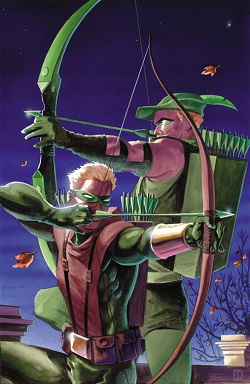 Green Arrow is a fictional character, published by DC Comics. Green Arrow was created by Mort Weisinger and George Papp and first appeared in More Fun Comics #73 in 1941. His secret identity is Oliver Queen and his friends call him Ollie. He is a billionaire and once was a mayor of the fictional city Star City.

Green Arrow is a superhero, but lacks any superpowers. He is similar in appearance and abilities to Robin Hood. Green Arrow is an archer who uses his expert skill in archery to fight crime. He wanted to help citizens when he fell off his boat and got stranded on an island. He also is a highly trained martial artist. Green Arrow is blond, dresses all in green, and as a goatee beard.

Since 1970 Green Arrow has usually been written as being explicitly left-wing politically and fighting for social justice.

Green Arrow has been a member of the Justice League and the Outsiders.

Green Arrow was romantically linked with Black Canary for many years.

All content from Kiddle encyclopedia articles (including the article images and facts) can be freely used under Attribution-ShareAlike license, unless stated otherwise. Cite this article:
Green Arrow Facts for Kids. Kiddle Encyclopedia.