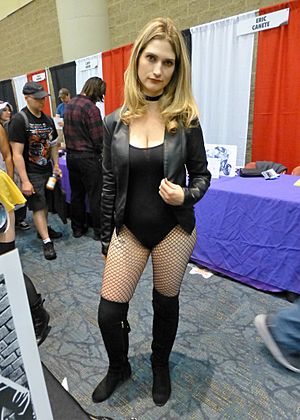 Black Canary (also known as Sara Lance) is the name of two fictional superheroines appearing in American comic books published by DC Comics: Dinah Drake and Dinah Laurel Lance along with rebooted amalgam version within The New 52. The original version was created by the writer-artist team of Robert Kanigher and Carmine Infantino. The character debuted in Flash Comics #86 (August 1947).

One of DC's earliest super-heroines, Black Canary has appeared in many of the company's flagship team-up titles including Justice Society of America and Justice League of America. Since the late 1960s, the character has been paired with archer superhero The Green Arrow professionally and romantically.

Black Canary has been adapted into various media. In Birds of Prey she was played by Rachel Skarsten, and in Smallville she was played by Alaina Huffman. In Arrow and the Arrowverse shows the characters Dinah Laurel Lance, Sara Lance, and Dinah Drake are portrayed by Katie Cassidy, Caity Lotz, and Juliana Harkavy. Dinah Lance made her cinematic debut in the DC Extended Universe film Birds of Prey, portrayed by Jurnee Smollett-Bell.

All content from Kiddle encyclopedia articles (including the article images and facts) can be freely used under Attribution-ShareAlike license, unless stated otherwise. Cite this article:
Black Canary Facts for Kids. Kiddle Encyclopedia.