Katherine Evelyn Anita Cassidy (born November 25, 1986), better known as Katie Cassidy and later Katie Cassidy Rodgers after her marriage, is an American actress. Following several minor television roles, she came to attention as a Scream Queen after starring in the horror films When a Stranger Calls (2006), as Kelli Presley in Black Christmas (2006) and as Ruby in the third season of the horror series Supernatural (2007–08).

Cassidy had her breakthrough in 2012, after being cast as Laurel Lance / Black Canary, on The CW television series Arrow. Cassidy has reprised her role in the Arrowverse series The Flash and Legends of Tomorrow as well as voicing the character in the animated web series Vixen. In 2017, Cassidy instead began playing Black Siren, an antagonistic version from a parallel universe, originating on The Flash and continuing on to Arrow.

Cassidy was born in Los Angeles. She is the only daughter from the short-lived relationship of actor and singer David Cassidy and fashion model Sherry Williams. Cassidy's paternal grandparents were actors Jack Cassidy and Evelyn Ward and she is the niece of teen idol and television producer Shaun Cassidy and actor Patrick Cassidy and Ryan Cassidy.

In her youth, Cassidy was on the competitive cheerleader team the California Flyers. A resident of Bell Canyon, California, she attended Calabasas High School. 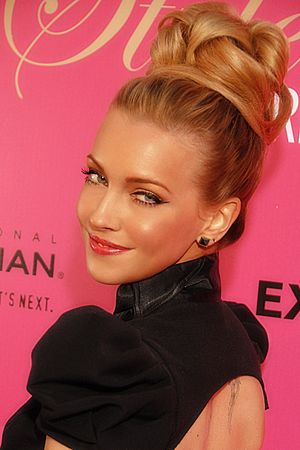 In 2002, Cassidy recorded a cover version of "I Think I Love You", which had been a hit for her father's made-for-television band, the Partridge Family. She was 15 at the time, five years younger than her dad when he recorded his version. It was the only song she released. In his 2007 autobiography, David Cassidy said he did not support his daughter's attempt at a music career, saying she was too young.

Cassidy is a spokeswoman for the charity H.E.L.P. Malawi.

Cassidy was in a relationship with Jesse McCartney for four years. She also dated Jarret Stoll, a Canadian ice hockey player, for two years until December 2011. In 2012, she briefly dated actor Jerry Ferrara. In 2016, she began dating Matthew Rodgers. The couple announced their engagement on June 5, 2017. Cassidy and Rodgers wed on December 8, 2018. 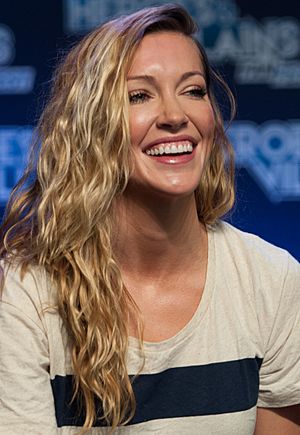 All content from Kiddle encyclopedia articles (including the article images and facts) can be freely used under Attribution-ShareAlike license, unless stated otherwise. Cite this article:
Katie Cassidy Facts for Kids. Kiddle Encyclopedia.