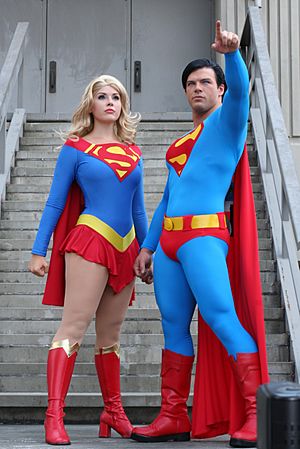 A superhero is a fictional character who protects innocent people and fights for good.

Modern superheroes usually have superhuman powers, for example have better senses, are stronger and faster than normal humans. Usually a superhero is courageous and noble. They usually have a colorful name and costume.

Some superheroes don't actually have super powers but are merely strong individuals who want to do good in the world. For example, Batman does not have any superpowers, but has been through years of training to be physically and mentally stronger than his enemies.

Also, many superheroes have tragic backstories that play into why they're superheroes in the first place. Batman, for example, saw both of his parents murdered in front of him and dedicated himself to fighting crime to prevent things like that happening to other people. Another example of this is Spider-Man who let a thief go that he could've easily stopped; that same thief later broke into his home and killed Spider-Man's uncle. After this, Spider-Man realized that he had to be responsible with his power and use it to help others.

All content from Kiddle encyclopedia articles (including the article images and facts) can be freely used under Attribution-ShareAlike license, unless stated otherwise. Cite this article:
Superhero Facts for Kids. Kiddle Encyclopedia.