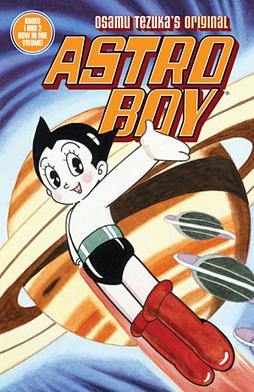 The cover for Astro Boy volume 1 and 2 compilation by Dark Horse Comics.

Astro Boy (鉄腕アトム, Tetsuwan Atomu, lit. "Iron Arm Atom") is a Japanese manga series first published in 1952 and television program first broadcast in Japan in 1963. The story follows the adventures of a robot named Astro Boy and a selection of other characters along the way.

Astro Boy is the first, most popular Japanese television series that embodied the aesthetic that later became familiar worldwide as anime. It originated as a manga in 1952 by Osamu Tezuka, revered in Japan as the "God of Manga".

All content from Kiddle encyclopedia articles (including the article images and facts) can be freely used under Attribution-ShareAlike license, unless stated otherwise. Cite this article:
Astro Boy Facts for Kids. Kiddle Encyclopedia.