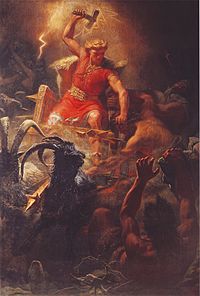 Thor's battle against the giants, by Mårten Eskil Winge, 1872

Thor (Old Norse: Þórr) is the god of thunder and lightning in Norse mythology, associated with strength, storms, hallowing and fertility. He is the son of Odin and Jörð, the personification of the Earth, and is physically the strongest of the Æsir. Thor is described as being fierce eyed, with red hair and a full beard, and he is quick to anger and has an enormous appetite.

The champion of Asgard, Thor is said to protect both it and Midgard from the likes of the jǫtnar, a race of beings native to Jötunheimr. He is known in Old English as Þunor (Thunor) and in Old High German as Donar (runic þonar ᚦᛟᚾᚨᚱ), all of which stem from the Proto-Germanic *Þunraz, meaning "thunder".

Thor is the son of Odin, chief of the Æsir, and Jörð, the living personification of the Earth. He is the eldest of Odin's sons and is the half-brother of Baldr, Höðr, Víðarr, and Váli.

He is married to the golden-haired goddess Sif, with whom he has a daughter, Þrúðr. With his jötunn lover Járnsaxa, Thor has two sons, Móði and Magni. He has a stepson, Ullr, who is Sif's son by a previous marriage.

Thor was believed to travel in a chariot drawn by two goats named Tanngrisnir and Tanngnjóstr. According to writings known as sagas, Thor wielded a short-handled war hammer, Mjölnir.

It was fashioned for him by the dwarven brothers Eitri and Brokkr, and is said to be the most powerful weapon in all the Nine Worlds, capable of crushing even mountains. When Thor threw the hammer, it magically returned to the god's hand.

Other attributes of Thor include a pair of gauntlets known as Járngreipr, which he is required to wear in order to wield Mjölnir, a belt, Megingjörð, which doubles his strength when he wears it, and a staff, Gríðarvölr, which, along with Járngreipr, was given to him by the jötunn Gríðr.

Thor is a character in Marvel Comics, his full name being Thor Odinson; son of Odin and Frigga, he is the god of thunder and a founding member of the Avengers. His archenemy is Loki, god of trickery and mischief as well as Thor's younger adopted brother. In the Marvel Cinematic Universe. Australian actor Chris Hemsworth (plays the role of Th5). He once again features as Thor in Thor (2017) and Avengers: Infinity War (2018), and reprised his role in Avengers: End game, which was released in April 2019. He is also scheduled to be in the next 'Guardians of the Galaxy' film by Marvel, scheduled for release in 2021, but may be delayed due to covid restrictions.

All content from Kiddle encyclopedia articles (including the article images and facts) can be freely used under Attribution-ShareAlike license, unless stated otherwise. Cite this article:
Thor Facts for Kids. Kiddle Encyclopedia.