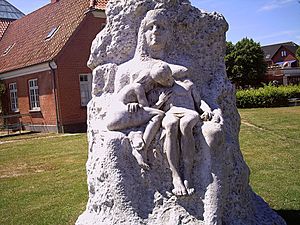 A statue depicting Jörð as a matriarchal figure

Jörð (or Jord) is a giantess (jötun) and goddess in Norse mythology. She is the personification of Earth. Her name means "Earth". She is also called Fjörgyn.

Jörð is the wife of Odin, king of the gods, and the mother of Thor. Her parents are Annar and Nótt.

Snorri Sturluson says Jörð was included among the Asynjur. Her name occurs most often in Skaldic and Eddic poetry in phrases that refer to Thor as "the son of Jörð". Fjörgyn, as an Old Norse noun, means "earth" when used in the feminine form.

All content from Kiddle encyclopedia articles (including the article images and facts) can be freely used under Attribution-ShareAlike license, unless stated otherwise. Cite this article:
Jörð Facts for Kids. Kiddle Encyclopedia.