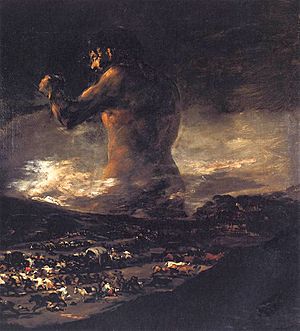 "The Giant" by Goya.

In mythology, a giant is a type of very large human-like creature. The mythology and legends of many different cultures have mythological animals or monsters that look like very big, very strong humans. One example of a giant is the gigantes of Greek mythology.

All content from Kiddle encyclopedia articles (including the article images and facts) can be freely used under Attribution-ShareAlike license, unless stated otherwise. Cite this article:
Giant Facts for Kids. Kiddle Encyclopedia.