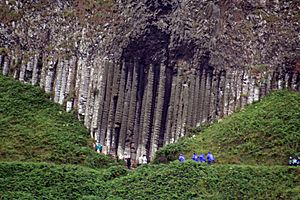 The Giant's Causeway is an area of about 40,000 interlocking basalt columns. The formation is a result of an ancient volcanic eruption. It is in County Antrim on the northeast coast of Northern Ireland. It is a World Heritage Site by UNESCO. It was named a National Nature Reserve in 1987 by the Department of the Environment for Northern Ireland. In a 2005 poll of Radio Times readers, the Giant's Causeway was named as the fourth greatest natural wonder in the United Kingdom.

The tops of the columns form stepping stones that lead from the cliff foot and disappear under the sea. Most of the columns are hexagonal, although there are also some with four, five, seven and eight sides. The tallest are about 12 metres (36 ft) high, and the solidified lava in the cliffs is 28 metres thick in places.

The Giant's Causeway is today owned and managed by the National Trust. It is the most popular tourist attraction in Northern Ireland. 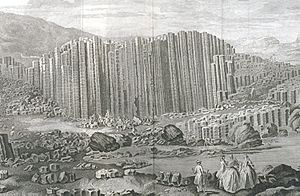 Engraving of Susanna Drury's A View of the Giant's Causeway: East Prospect, 1768

According to legend, the columns are the remains of a causeway built by a giant. The story goes that the Irish giant Fionn mac Cumhaill (Finn MacCool), from the Fenian Cycle of Gaelic mythology, was challenged to a fight by the Scottish giant Benandonner. Fionn accepted the challenge and built the causeway across the North Channel so that the two giants could meet. In one version of the story, Fionn defeats Benandonner. In another, Fionn hides from Benandonner when he realises that his foe is much bigger than he is. Fionn's wife, Oonagh, disguises Fionn as a baby and tucks him in a cradle. When Benandonner sees the size of the 'baby', he reckons that its father, Fionn, must be a giant among giants. He flees back to Scotland in fright, destroying the causeway behind him so that Fionn would be unable to chase him down. Across the sea, there are identical basalt columns (a part of the same ancient lava flow) at Fingal's Cave on the Scottish isle of Staffa, and it is possible that the story was influenced by this.

In overall Irish mythology, Fionn mac Cumhaill is not a giant but a hero with supernatural abilities, contrary to what this particular legend may suggest. In Fairy and Folk Tales of the Irish Peasantry (1888), it is noted that, over time, "the pagan gods of Ireland [...] grew smaller and smaller in the popular imagination, until they turned into the fairies; the pagan heroes grew bigger and bigger, until they turned into the giants". There are no surviving pre-Christian stories about the Giant's Causeway, but it may have originally been associated with the Fomorians (Fomhóraigh); the Irish name Clochán na bhFomhóraigh or Clochán na bhFomhórach means "stepping stones of the Fomhóraigh". The Fomhóraigh are a race of supernatural beings in Irish mythology who were sometimes described as giants and who may have originally been part of a pre-Christian pantheon.

The Giant's Causeway and Fingal's Cave are part of the same volcanic eruption. They were separated by the plate tectonics movements which happened when the supercontinent Pangaea broke up.

During the Palaeogene period, some 50 to 60 million years ago, Antrim was subject to intense volcanic activity. Highly fluid molten basalt intruded through chalk beds to form a large scale lava plateau. As the lava cooled rapidly, contraction occurred. The size of the columns is mostly determined by the speed at which lava from a volcanic eruption cools. The extensive fracture network produced the distinctive columns seen today. The basalts were originally part of a great volcanic plateau called the Thulean Plateau which formed during the Paleogene period. Parts of this plateau can be found in the Faroe Islands, Iceland, and Norway, as well as at Fingal's Cave.

Some of the structures in the area, having been subject to several million years of weathering, resemble objects, such as the Organ and Giant's Boot structures. Other features include many reddish, weathered low columns known as Giant's Eyes, created by the displacement of basalt boulders; the Shepherd's Steps; the Honeycomb; the Giant's Harp; the Chimney Stacks; the Giant's Gate and the Camel's Hump. 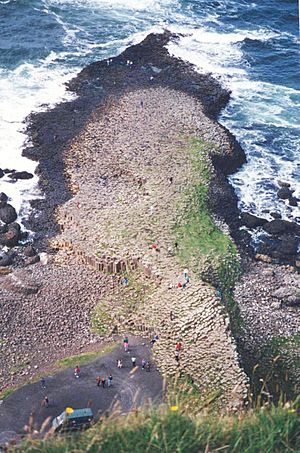 The area is a haven for seabirds, such as fulmar, petrel, cormorant, shag, redshank, guillemot and razorbill, while the weathered rock formations host numerous plant types, including sea spleenwort, hare's-foot trefoil, vernal squill, sea fescue and frog orchid. A stromatolite colony was reportedly found at the Giant's Causeway in October 2011 – an unusual find, as stromatolites are more commonly found in warmer waters with higher saline content than that found at the causeway.

All content from Kiddle encyclopedia articles (including the article images and facts) can be freely used under Attribution-ShareAlike license, unless stated otherwise. Cite this article:
Giant's Causeway Facts for Kids. Kiddle Encyclopedia.