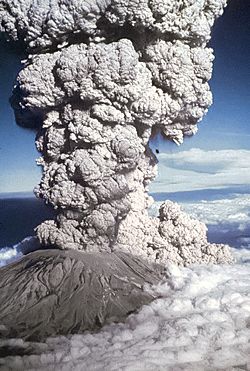 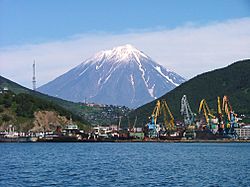 A volcano is a mountain that has lava (hot, liquid rock) coming out from a magma chamber under the ground, or did have in the past. Volcanoes are formed by the movement of tectonic plates.

Volcanism away from plate boundaries is caused by mantle plumes. These so-called "hotspots", for example Hawaii, are thought to arise from upwelling magma from the core–mantle boundary, 3,000 km deep in the Earth.

When there is enough pressure, the volcano erupts. Some volcanic eruptions blow off the top of the volcano. Sometimes, the magma comes out quickly and sometimes it comes slowly. Some eruptions come out at a side instead of the top.

The world's biggest volcano is named Mauna Loa in Hawaii. Mauna Loa is part of the five volcanoes on Hawaii's 'Big Island'. The most recent time this volcano erupted was in 1984. It erupted 33 times in the last 170 years. Like all the other Hawaiian volcanoes, Mauna Loa was created by the movement of the Pacific tectonic plate which moved over the Hawaii hotspot in the Earth's mantle. Mauna Loa is 4,196 meters tall. It is a shield volcano. The largest recent eruption from Mauna Loa left a lava trail 51 kilometres (32 miles) long. 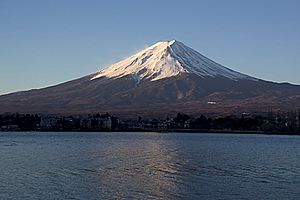 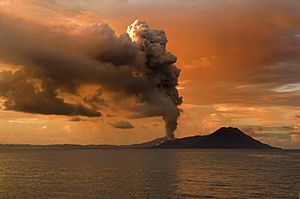 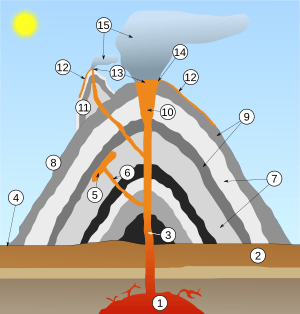 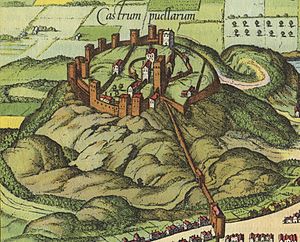 The Earth's largest volcano has been discovered. It is 2 km below the sea on an underwater plateau known as the Shatsky Rise. This is about 1,600 km east of Japan. The previous record-holder, Mauna Loa in Hawaii, is still the largest volcano on land.

The 310,000 km2 (119,000 sq mi) volcano, Tamu Massif, is comparable in size to Mars' vast Olympus Mons volcano, which is the largest in the Solar System. It was formed about 145 million years ago when massive lava flows erupted from the centre of the volcano to form a broad, shield-like feature. That suggests the volcano produced a flood basalt eruption.

"The bottom line is that we think that Tamu Massif was built in a short (geologically speaking) time of one to several million years and it has been extinct since," co-author William Sager, of the University of Houston told the AFP news agency.
"There were lots of oceanic plateaus (that) erupted during the Cretaceous period (145-65 million years ago) but we don't see them since. Scientists would like to know why... The biggest oceanic plateau is Ontong Java plateau, near the equator in the Pacific, east of the Solomon Islands. It is much bigger than Tamu – it's the size of France".