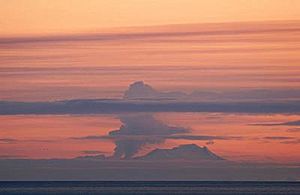 Before the eruption began on September 17, 2006, Fourpeaked volcano had been dormant for over 10,000 years.

Pilots and other civilians reported two distinct and very large steam plumes coming from Fourpeaked volcano. They were seen as far away as Homer, Alaska located northeast of Fourpeaked across Cook Inlet. Scientists on subsequent flights by USGS/AVO discovered that volcanic gases were being vented "vigorously" near the summit. Air sampling confirmed these findings. The Alaska Volcano Observatory officially classified this event as an explosive eruption.

The Alaska Volcano Observatory upgraded Fourpeaked volcano from the classification "not assigned" to Level of Concern Color Code Yellow on September 20, 2006. This color-coded system was later renamed the Aviation Alert Level, but with the same color-coding system. At that time they began installing seismic monitoring equipment on the mountain and using fixed-wing aircraft as well as helicopters to monitor the volcano.

On September 25, 2006, the AVO warned that Fourpeaked would likely erupt again, and released the following information as part of a special information release:

Based on all currently available evidence, AVO believes that an eruption from Fourpeaked in the next days to weeks is possible. Given below are some possible future scenarios for the current unrest at Fourpeaked, listed in order, with the most likely scenario listed first:

The Alaska Volcano Observatory completed installation of another seismometer near Fourpeaked. Almost immediately they detected an earthquake swarm of lower magnitude quakes. This behavior continued intermittently through the spring of 2007. Fourpeaked also continued to vent volcanic gases at the same rate as revealed in earlier air sampling. 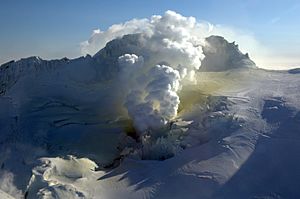 Fourpeaked Mountain with active fumaroles and sulfur deposits on February 22, 2007

In February, 2007 Fourpeaked began showing a relatively small but noticeable increase in activity. The Alaska Volcano Observatory reported February 8–9 that: "Three small explosive events were recorded by seismic and acoustic instruments Thursday and Friday (February 08–09) beginning at 10:36 AM AKST (1936 UTC) February 08. A possible large steam plume was observed in several partly cloudy satellite views Thursday afternoon." On February 18, the AVO reported a swarm of 13 small earthquakes under Fourpeaked, with the largest measuring 1.8 on the Richter magnitude scale. On February 23, the AVO conducted a gas flight and detected the continued emission of sulfur dioxide (SO2).

The Alaska Volcano Observatory began reporting in its Daily Update on Fourpeaked volcano that "several small explosion signals" were detected overnight, apparently continuing the series of small explosions which began on February 8. These "small explosions" continued until June, when Fourpeaked's classification was lowered to Green.

All content from Kiddle encyclopedia articles (including the article images and facts) can be freely used under Attribution-ShareAlike license, unless stated otherwise. Cite this article:
Fourpeaked Mountain Facts for Kids. Kiddle Encyclopedia.