Homer is a city located in Kenai Peninsula Borough in the U.S. state of Alaska. It is two hundred and eighteen miles southwest of Anchorage. According to the 2010 Census, the population is 5,003. Long known as The "Halibut Fishing Capital of the World." Homer is also nicknamed "the end of the road," and more recently, "the cosmic hamlet by the sea."

Homer is on the shore of Kachemak Bay on the southwest side of the Kenai Peninsula. Its distinguishing feature is the Homer Spit, a narrow 4.5 mi (7.2 km)) long gravel bar that extends into the bay, on which is located the Homer Harbor.

Much of the coastline as well as the Homer Spit sank dramatically during the Good Friday earthquake in March 1964. After the earthquake, very little vegetation was able to survive on the Homer Spit.

As with much of South Central Alaska, Homer has a moderate subarctic coastal climate (Köppen Dsc) which causes its weather to be moderate compared to interior Alaska. Winters are snowy and long but not particularly cold, considering the latitude, with the average January high only slightly below freezing. Snow averages 50 inches (127 cm) per season, falling primarily from November through March, with some accumulation in October and April, and rarely in May. Homer receives only about 25 inches of rainfall annually due to the influence of the Chugach Mountains to the southeast which shelter it from the Gulf of Alaska. There are 7 nights of sub-0 °F (−18 °C) lows annually, and the area straddles the border between USDA Plant Hardiness Zones 5B and 6A, indicating an average annual minimum of around −10 °F (−23 °C). Summers are cool due to the marine influence, with 75 °F (24 °C) highs or 55 °F (13 °C) lows being extremely rare. Extreme temperatures have ranged from −24 °F (−31 °C) on January 28–29, 1989 up to 84 °F (29 °C) on July 22, 2011. 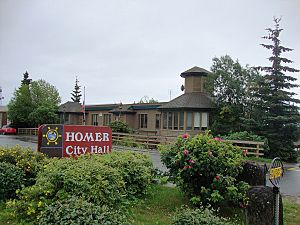 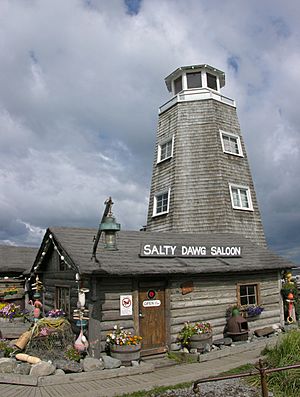 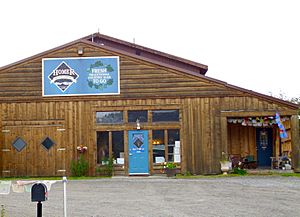 Homer has a winery and a brewery 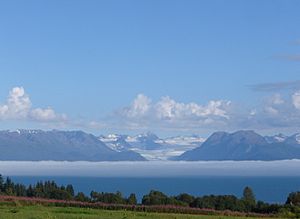 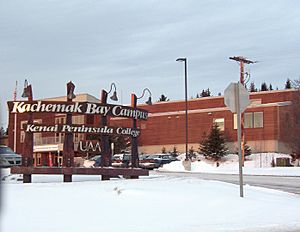 Tiller digs indicate that early Alutiiq people probably camped in the Homer area although their villages were on the far side of Kachemak Bay.

Coal was discovered in the area in the 1890s. The Cook Inlet Coal Fields Company built a town, dock, coal mine, and a railroad at Homer. Coal mining in the area continued until World War II. There are an estimated 400 million tons of coal deposits still in the area.

Homer was named for Homer Pennock, a gold-mining company promoter, who arrived in 1896 on the Homer Spit and built living quarters for his crew of 50 men. However, gold mining was never profitable in the area.

Another earlier settlement was Miller's Landing. Miller's Landing is named after a Charles Miller who homesteaded in the neighborhood around 1915. According to local historian Janet Klein, he was an employee of the Alaska Railroad and had wintered company horses on the beach grasses on the Homer Spit. He built a landing site in a small bight in Kachemak Bay where supply barges from Seldovia could land and offload their cargos. Miller's landing was legally considered a census-designated place separate from Homer until it was annexed in 2002, but has always been locally considered part of Homer.

Halibut and salmon sport fishing, along with tourism and commercial fishing are the dominant industries. Homer co-hosted the 2006 Arctic Winter Games. The Alaska Maritime National Wildlife Refuge and the Kachemak Bay Research Reserve co-host a visitor center with interpretive displays known as the "Alaska Islands and Ocean Visitor Center", and there is a cultural and historical museum called "The Pratt Museum".

There were 2,235 households of which 27.2% had children under the age of 18 living with them, 44.3% were married couples living together, 9.3% had a female householder with no husband present, 4.3% had a male householder with no wife present, and 42.0% were non-families. 33.7% of all households were made up of individuals, and 11.0% had someone living alone who was 65 years of age or older. The average household size was 2.21, and the average family size was 2.83. 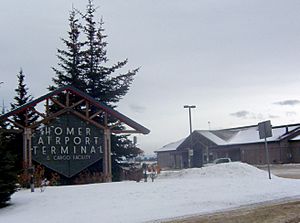 Homer is the southernmost town on the contiguous Alaska highway system. It is also part of the Alaska Marine Highway (the Alaskan ferry system). The regional airport lies near the coast as well, with local air taxis and regular scheduled commercial flights to Anchorage. Homer erected its first traffic light in 2005.

The United States Coast Guard currently stations six Island Class cutters in Alaska, including one in Homer. From February 7, 1992, to June 4, 2015, the USCGC Roanoke Island was assigned to Homer. She was retired early, and was replaced by the Sapelo. The Sapelo is scheduled to be replaced by a more modern Sentinel-class cutter.

All content from Kiddle encyclopedia articles (including the article images and facts) can be freely used under Attribution-ShareAlike license, unless stated otherwise. Cite this article:
Homer, Alaska Facts for Kids. Kiddle Encyclopedia.