Kachemak Bay (Dena'ina: Tika Kaq’) is a 40-mi-long (64 km) arm of Cook Inlet in the U.S. state of Alaska, located on the southwest side of the Kenai Peninsula. The communities of Homer, Halibut Cove, Seldovia, Nanwalek, Port Graham, and Kachemak City are on the bay as well as three Old Believer settlements in the Fox River area, Voznesenka, Kachemak Selo, and Razdolna.

One interpretation of the word "Kachemak" is "Smokey Bay" which supposedly is from an Alutiiq word describing the smoldering coal seams that used to fill the bay with smoke. 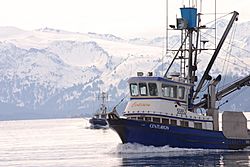 Kachemak Bay is also home to the Kachemak Bay National Estuarine Research Reserve, the largest reserve in the National Estuarine Research Reserve System. It is a very active site of research and education. The bay hosts a remarkably high level of biological activity, due in part to water circulation patterns which keep shellfish larve and nutrients in the bay. While surface waters push nutrients out into the bay, ocean currents push them back into the bay, creating a very fertile environment. Both fish and shellfish are abundant in the bay, year-round. Waterfowl and shorebirds occupy the bay during all but the winter season, while waterbirds and marine mammals including otters, seals, porpoise, and whales remain in the bay all year. The bay provides winter homes for 90% of the seabird and waterfowl populations of Lower Cook Inlet. Land mammals are frequently seen during the warmer seasons. Moose, coyote, and bears are frequently seen.

All content from Kiddle encyclopedia articles (including the article images and facts) can be freely used under Attribution-ShareAlike license, unless stated otherwise. Cite this article:
Kachemak Bay Facts for Kids. Kiddle Encyclopedia.