Porpoises are a group of fully aquatic marine mammals, all of which are classified under the family Phocoenidae, parvorder Odontoceti (toothed whales). There are seven extant species of porpoise. They are small toothed whales that are very closely related to oceanic dolphins. The most obvious visible difference between the two groups is that porpoises have shorter beaks and flattened, spade-shaped teeth distinct from the conical teeth of dolphins. Porpoises, and other cetaceans, belong to the clade Cetartiodactyla with even-toed ungulates, and their closest living relatives are the hippopotamuses, having diverged from them about 40 million years ago.

Porpoises range in size from the 1.4 metres (4.6 ft) and 54 kilograms (119 lb) vaquita, the smallest cetacean to be discovered, to the 2.3 metres (7.5 ft) and 220 kilograms (490 lb) Dall's porpoise. Several species exhibit sexual dimorphism in that the females are larger than males. They have streamlined bodies and two limbs that are modified into flippers. Dall's porpoise is one of the fastest cetaceans discovered, with the ability to travel at 41 knots (76 km/h). Porpoises use echolocation as their primary sensory system. Some species are well adapted for diving to great depths. They have a layer of fat, or blubber, under the skin to keep them warm in cold water.

Porpoises are not very widespread, with many specialising near the polar regions, usually near the coast. Porpoises feed largely on fish and squid, much like the rest of the odontocetes. Males typically mate with multiple females every year, but females only mate every two to three years. Calves are typically born in the spring and summer months and females bear all the responsibility for raising them. Some porpoises produce a variety of clicks and whistles, which are thought to be primarily for social purposes. A few species, like the harbour porpoise, are highly sociable, but pods generally do not exceed ten individuals for most species.

Porpoises were, and still are, hunted by some countries by means of drive hunting. Some species are attributed with high levels of intelligence. At the 2012 meeting of the American Association for the Advancement of Science, support was reiterated for a cetacean bill of rights that would list cetaceans as non-human persons. The vaquita nearly became extinct in the twentieth century, with a predicted population of fewer than 100 individuals, and, since the extinction of the baiji, is considered the most endangered cetacean. Other threats to porpoises include becoming bycatch, facing competition (from humans), and marine pollution. Porpoises are sometimes kept in captivity and trained to perform tricks, but breeding success has been poor.

Porpoises, along with whales and dolphins, are descendants of land-living ungulates (hoofed animals) that first entered the oceans around 50 million years ago (Mya). During the Miocene (23 to 5 Mya), mammals were fairly modern, meaning they seldom changed physiologically from the time. The cetaceans diversified, and fossil evidence suggests porpoises and dolphins diverged from their last common ancestor around 15 Mya. The oldest fossils are known from the shallow seas around the North Pacific, with animals spreading to the European coasts and Southern Hemisphere only much later, during the Pliocene.

Porpoises have a bulbous head, no external ear flaps, a non-flexible neck, a torpedo shaped body, limbs modified into flippers, and a tail fin. Their skull has small eye orbits, small, blunt snouts, and eyes placed on the sides of the head. Porpoises range in size from the 1.4 metres (4.6 ft) and 54 kilograms (119 lb) Vaquita to the 2.3 metres (7.5 ft) and 220 kilograms (490 lb) Dall's porpoise. Overall, they tend to be dwarfed by other cetaceans. Almost all species have female-biased sexual dimorphism, with the females being larger than the males, although those physical differences are generally small; one exception is Dall's porpoise.

Odontocetes possess teeth with cementum cells overlying dentine cells. Unlike human teeth, which are composed mostly of enamel on the portion of the tooth outside of the gum, whale teeth have cementum outside the gum. Porpoises, like other odontocetes, possess only one blowhole. Breathing involves expelling stale air from the blowhole, forming an upward, steamy spout, followed by inhaling fresh air into the lungs. All porpoises have a thick layer of blubber. This blubber can help with insulation from the harsh underwater climate, protection to some extent as predators would have a hard time getting through a thick layer of fat, and energy for leaner times. Calves are born with only a thin layer of blubber, but some species compensate for this with a covering of fine, downy hair known as lanugo.

Porpoises have a two-chambered stomach that is similar in structure to those of terrestrial carnivores. They have fundic and pyloric chambers.

Porpoises have two flippers on the front, and a tail fin. Although porpoises do not possess fully developed hind limbs, they possess discrete rudimentary appendages, which may contain feet and digits. Their flippers, for example, contain four digits. Porpoises are fast swimmers in comparison to seals, which typically cruise at 5–15 kn, or 9–28 kilometres per hour (5.6–17.4 mph); Dall's porpoise, in comparison, can travel at speeds up to 74 kilometres per hour (46 mph). The fusing of the neck vertebrae, while increasing stability when swimming at high speeds, decreases flexibility, making it impossible for them to turn their head. When swimming, they move their tail fin and lower body up and down, propelling themselves through vertical movement, while their flippers are mainly used for steering. Flipper movement is continuous. Some species log out of the water, which may allow then to travel faster, and sometimes they porpoise out of the water, meaning jump out of the water. Their skeletal anatomy allows them to be fast swimmers. They have a very well defined and triangular dorsal fin, allowing them to steer better in the water. Unlike their dolphin counterparts, they are adapted for coastal shores, bays, and estuaries.

The porpoise ear has specific adaptations to the marine environment. In humans, the middle ear works as an impedance equaliser between the outside air's low impedance and the cochlear fluid's high impedance. In whales, and other marine mammals, there is no great difference between the outer and inner environments. Instead of sound passing through the outer ear to the middle ear, porpoises receive sound through the throat, from which it passes through a low-impedance fat-filled cavity to the inner ear. The porpoise ear is acoustically isolated from the skull by air-filled sinus pockets, which allow for greater directional hearing underwater. Odontocetes send out high frequency clicks from an organ known as a melon. This melon consists of fat, and the skull of any such creature containing a melon will have a large depression. The large bulge on top of the porpoises head is caused by the melon.

The porpoise eye is relatively small for its size, yet they do retain a good degree of eyesight. As well as this, the eyes of a porpoise are placed on the sides of its head, so their vision consists of two fields, rather than a binocular view like humans have. When porpoises surface, their lens and cornea correct the nearsightedness that results from the refraction of light; their eyes contain both rod and cone cells, meaning they can see in both dim and bright light. Porpoises do, however, lack short wavelength sensitive visual pigments in their cone cells indicating a more limited capacity for colour vision than most mammals. Most porpoises have slightly flattened eyeballs, enlarged pupils (which shrink as they surface to prevent damage), slightly flattened corneas and a tapetum lucidum; these adaptations allow for large amounts of light to pass through the eye and, therefore, they are able to form a very clear image of the surrounding area.

The olfactory lobes are absent in porpoises, suggesting that they have no sense of smell.

Porpoises are not thought to have a good sense of taste, as their taste buds are atrophied or missing altogether. However, some have preferences between different kinds of fish, indicating some sort of attachment to taste.

Unlike most animals, porpoises are conscious breathers. All mammals sleep, but porpoises cannot afford to become unconscious for long because they may drown. While knowledge of sleep in wild cetaceans is limited, porpoises in captivity have been recorded to sleep with one side of their brain at a time, so that they may swim, breathe consciously, and avoid both predators and social contact during their period of rest. 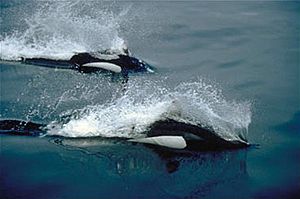 Porpoises are fully aquatic creatures. Females deliver a single calf after a gestation period lasting about a year. Calving takes place entirely under water, with the foetus positioned for tail-first delivery to help prevent drowning. Females have mammary glands, but the shape of a newborn calf's mouth does not allow it to obtain a seal around the nipple— instead of the calf sucking milk, the mother squirts milk into the calf's mouth. This milk contains high amounts of fat, which aids in the development of blubber; it contains so much fat that it has the consistency of toothpaste. The calves are weaned at about 11 months of age. Males play no part in rearing calves. The calf is dependent for one to two years, and maturity occurs after seven to ten years, all varying between species. This mode of reproduction produces few offspring, but increases the probability of each one surviving.

Porpoises eat a wide variety of creatures. The stomach contents of harbour porpoises suggests that they mainly feed on benthic fish, and sometimes pelagic fish. They may also eat benthic invertebrates. In rare cases, algae, such as Ulva lactuca, is consumed. Atlantic porpoises are thought to follow the seasonal migration of bait fish, like herring, and their diet varies between seasons. The stomach contents of Dall's porpoises reveal that they mainly feed on cephalopods and bait fish, like capelin and sardines. Their stomachs also contained some deep-sea benthic organisms.

The finless porpoise is known to also follow seasonal migrations. It is known that populations in the mouth of the Indus River migrate to the sea from April through October to feed on the annual spawning of prawns. In Japan, sightings of small pods of them herding sand lance onto shore are common year-round.

Porpoises and other smaller cetaceans, mainly dolphins, are hunted in an activity known as drive hunting. This is accomplished by driving a pod together with boats and usually into a bay or onto a beach. Their escape is prevented by closing off the route to the ocean with other boats or nets. Porpoises are hunted this way in several places around the world, including the Faroe Islands, Peru, and Japan, the most well-known practitioner of this method. Porpoises are mostly hunted for their meat. Despite the controversial nature of the hunt resulting in international criticism, and the possible health risk that the high methylmercury levels impose, cetaceans are hunted at unsustainable levels. Dall's porpoises are the most targeted in Japan, and between the 1986 moratorium banning whaling worldwide and 2013, more than 400,000 had been killed. 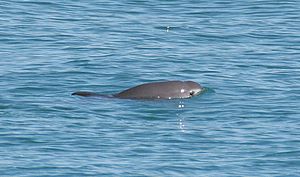 A vaquita swimming in the Gulf of California.

Porpoises are highly affected by bycatch. Many porpoises, mainly the vaquita, are subject to great mortality due to gillnetting. Although it is the world's most endangered marine cetacean, the vaquita continues to be caught in small-mesh gillnet fisheries throughout much of its range. Incidental mortality caused by the fleet of El Golfo de Santa Clara was estimated to be at around 39 vaquitas per year, which is over 17% of the population size. Harbour porpoises also suffer drowning by gillnetting, but on a less threatening scale due to their high population; their mortality rate per year increases a mere 5% due to this.

The fishing market, historically has always had a porpoise bycatch. Today, the Marine Mammal Protection Act of 1972 has enforced the use of safer fishing equipment to reduce bycatch.

All content from Kiddle encyclopedia articles (including the article images and facts) can be freely used under Attribution-ShareAlike license, unless stated otherwise. Cite this article:
Porpoise Facts for Kids. Kiddle Encyclopedia.