Kids Encyclopedia Facts
This article is about the oceanic dolphins. For the river dolphins, see River dolphin.

Oceanic dolphins or Delphinidae are a widely distributed family of dolphins that live in the sea. Thirty extant species are described. They include several big species whose common names contain "whale" rather than "dolphin", such as the killer whale and the pilot whales. Delphinidae is a family within the superfamily Delphinoidea, which also includes the porpoises (Phocoenidae) and the Monodontidae (beluga whale and narwhal). River dolphins are relatives of the Delphinoidea.

Oceanic dolphins range in size from the 5.6-foot (1.7 m)-long and 110-pound (50 kg) Maui's dolphin to the 31-foot (9.4 m) and 11-short-ton (10.0 t) killer whale, the largest known dolphin. Several species exhibit sexual dimorphism; the males are larger than females. They have streamlined bodies and two limbs that are modified into flippers. Though not quite as flexible as seals, some dolphins can travel at 34.5 mph (55.5 km/h). Most delphinids primarily eat fish, along with a smaller number of squid and small crustaceans, but some species specialise in eating squid, or, in the case of the killer whale, also eat marine mammals and birds. All, however, are purely carnivorous. They typically have between 100 and 200 teeth, although a few species have considerably fewer. Delphinids travel in large pods, which may number a thousand individuals in some species. Each pod forages over a range of a few dozen to a few hundred square miles. Some pods have a loose social structure, with individuals frequently joining or leaving, but others seem to be more permanent, perhaps dominated by a male and a harem of females. Individuals communicate by sound, producing low-frequency whistles, and also produce high-frequency broadband clicks of 80–220 kHz, which are primarily used for echolocation. Gestation lasts from 10 to 18 months, and results in the birth of a single calf. Some species are well adapted for diving to great depths. They have a layer of fat, or blubber, under the skin to keep warm in the cold water.

Although oceanic dolphins are widespread, most species prefer the warmer waters of the tropic zones, but some, like the right whale dolphin, prefer colder climates. Some have a global distribution, like the killer whale. Oceanic dolphins feed largely on fish and squid, but a few, like the killer whale, feed on large mammals, like seals. Male dolphins typically mate with multiple females every year, but females only mate every two to three years. Calves are typically born in the spring and summer, and females bear all the responsibility for raising them. Mothers of some species fast and nurse their young for relatively long times. Dolphins produce a variety of vocalizations, usually in the form of clicks and whistles.

Oceanic dolphins are sometimes hunted in places such as Japan, in an activity known as dolphin drive hunting. Besides drive hunting, they also face threats from bycatch, habitat loss, and marine pollution. Dolphins have been depicted in various cultures worldwide. They occasionally feature in literature and film, as in the Warner Bros film Free Willy. Dolphins are sometimes kept in captivity and trained to perform in shows. The most common species of dolphin in captivity is the bottlenose dolphin, and less than 50 killer whales were found in oceanariums in 2012. 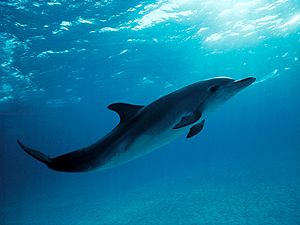 The Delphinidae are the most diverse of the cetacean families, with numerous variations between species. They range in size from 1.2 m (3.9 ft) and 40 kg (88 lb) (Haviside's dolphin), to 9 m (30 ft) and 10 tonnes (killer whale). Most species weigh between 50 and 200 kg (110 and 440 lb). They typically have curved dorsal fins, clear 'beaks' at the front of their heads, and forehead melons, although exceptions to all of these rules are found. They have a wide range of colors and patterns.

Oceanic dolphins have a torpedo-shaped body with an inflexible neck, limbs modified into flippers, nonexistent external ear flaps, a large tail fin, and a bulbous head. A dolphin skull has small eye orbits, a long snout, but not as long as its river dolphin counterpart, and eyes placed on the sides of its head. Several species exhibit sexual dimorphism, with the females being larger than the males.

Breathing involves expelling stale air from the blowhole, forming an upward, steamy spout, followed by inhaling fresh air into the lungs; a spout only occurs when the warm air from the lungs meets the cold external air, so it may only form in colder climates.

All oceanic dolphins have a thick layer of blubber, the thickness of which depends on how far the species lives from the equator. This blubber can aid in protection to some extent as predators would have a hard time getting through a thick layer of fat and insulation from the harsh climate or cold depths. Calves are born with only a thin layer of blubber, but some species compensate for this with lanugos.

Oceanic dolphins have two flippers on the underside toward the head, a dorsal fin, and a tail fin. These flippers contain four digits.

The fusing of the neck vertebrae, while increasing stability when swimming at high speeds, decreases flexibility, which means they are unable to turn their heads.

Oceanic dolphins swim by moving their tail fin and rear body vertically, while their flippers are mainly used for steering. Some species log out of the water, which may allow them to travel faster. Their skeletal anatomy allows them to be fast swimmers. All species have a dorsal fin to prevent themselves from involuntarily spinning in the water.

The oceanic dolphin ear is specifically adapted to the marine environment.

Dolphins send out high frequency clicks from an organ known as a melon. This melon consists of fat, and the skull of any such creature containing a melon will have a large depression. This allows dolphins to produce biosonar for orientation.

Though most dolphins do not have hair, they do have hair follicles that may perform some sensory function.

The eye of oceanic dolphins is relatively small for its size, yet they do retain a good degree of eyesight. As well as this, the eyes of a dolphin are placed on the sides of its head, so their vision consists of two fields, rather than a binocular view like humans have.

The olfactory lobes are absent in oceanic dolphins, suggesting that they have no sense of smell.

Oceanic dolphins are not thought to have a good sense of taste, as their taste buds are atrophied or missing altogether. However, some have preferences between different kinds of fish, indicating some sort of attachment to taste.

Most delphinids primarily eat fish, along with a smaller number of squid and small crustaceans, but some species specialize in eating squid, or, in the case of the killer whale, also eat marine mammals and birds. All, however, are purely carnivorous. They typically have between 100 and 200 teeth, although a few species have considerably fewer. Various methods of feeding exist among and within oceanic species, some apparently exclusive to a single population. Fish and squid are the main food, but the false killer whale and the killer whale also feed on other marine mammals. Killer whales on occasion also hunt whales larger than themselves.

One common feeding method is herding, where a pod squeezes a school of fish into a bait ball. Individual members then take turns plowing through the ball, feeding on the stunned fish. Coralling is a method where dolphins chase fish into shallow water to catch them more easily. Killer whales and bottlenose dolphins have also been known to drive their prey onto a beach to feed on it, a behavior known as beach or strand feeding. Some species also whack fish with their flukes, stunning them and sometimes knocking them out of the water.

Oceanic dolphins are capable of making a broad range of sounds using nasal airsacs located just below the blowhole. Roughly three categories of sounds can be identified: frequency modulated whistles, burst-pulsed sounds, and clicks. Dolphins communicate with whistle-like sounds produced by vibrating connective tissue, similar to the way human vocal cords function, and through burst-pulsed sounds, though the nature and extent of that ability is not known. The clicks are directional and are for echolocation, often occurring in a short series called a click train. The click rate increases when approaching an object of interest. Dolphin echolocation clicks are amongst the loudest sounds made by marine animals. 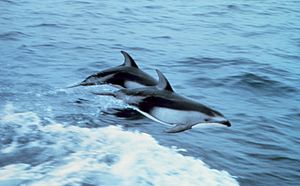 Oceanic dolphins frequently leap above the water surface, this being done for various reasons. When travelling, jumping can save the dolphin energy as there is less friction while in the air. This type of travel is known as porpoising. Other reasons include orientation, social displays, fighting, non-verbal communication, entertainment and attempting to dislodge parasites.

Dolphins show various types of playful behavior, often including objects, self-made bubble rings, other dolphins, or other animals. Playful human interaction with dolphins is one example, but playful interactions have been observed in the wild with a number of other species as well, including Humpback Whales and dogs.

Brain size was previously considered a major indicator of the intelligence of an animal. The brain to body mass ratio in some is second only to humans.

Self-awareness is seen, by some, to be a sign of highly developed, abstract thinking. Research in this field has suggested that cetaceans, among others, possess self-awareness.

The most widely used test for self-awareness in animals is the mirror test in which a temporary dye is placed on an animal's body, and the animal is then presented with a mirror; they then see if the animal shows signs of self-recognition.

All content from Kiddle encyclopedia articles (including the article images and facts) can be freely used under Attribution-ShareAlike license, unless stated otherwise. Cite this article:
Oceanic dolphin Facts for Kids. Kiddle Encyclopedia.