The Hourglass dolphin, Lagenorhynchus cruciger, is small and wide compared to other dolphins. It only lives in the very cold waters of the Antarctic. It was not known to science until a drawing was made of it in 1820. Only six Hourglass dolphins have been examined by scientists. Boats do not usually go where they live. The average water temperature they live in is 0.1-0.3 degrees Celsius.

The hourglass dolphin is black and white and for this reason was called the "sea skunk". On each side there is a white patch that looks a little like an hourglass shape. That is how it got its name.

An adult is about 1.8 m in length and weighs 90-120 kg. There is only one other dolphin that is as small in its area. Hourglass Dolphins usually stay in groups of 5-10. Once a group of 60 was recorded. They like to ride the bow of boats. There are usually Fin whales with them. It is thought they eat small fish, crustaceans, and squid. They have conical teeth probably used to crack the shells of crustaceans.

The hourglass dolphin stays around the Antarctic. Some have been seen from the south of New Zealand and Chile. 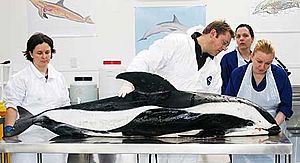 A rare look at the hourglass dolphin.

The hourglass dolphin is coloured black and white and sometimes variations of dark grey. For this reason, it was colloquially known by whalers as a "sea cow" (although it does not belong to the taxonomic order Sirenia.) Each flank has a white patch at the front, above the beak, eye and flipper, and a second patch at the rear. These two patches are connected by a thin white strip, creating, loosely speaking, an hourglass shape; hence the common name of the dolphin. The scientific name cruciger is Latin for "cross-carrier". This refers to the area of black coloration, which, viewed from above, vaguely resembles a Maltese cross or cross pattée. There have been no verified sightings of calves and their coloration remains unknown.

In its usual range the dolphin is easily identifiable. Only the southern right whale dolphin is of comparable size and lives as far south. The right whale dolphin does not have a dorsal fin, so the two species are easily distinguished. The fin considerably varies across individuals. It is generally tall and curved, and the curve may be particularly pronounced in older animals.

A fully grown adult is about 1.8 meters (5.9 ft) length and weighs 90–120 kilograms (200–260 lb). Males are thought to be slightly smaller and lighter than females, although the small number of specimens does not permit a firm conclusion.

Like all species of dolphin, they use echolocation to find food and communicate with other members of the their pod.

The range is circumpolar from close to the Antarctic ice pack to about 45°S. The most northerly confirmed sightings were 36°S in the South Atlantic Ocean and 33°S near Valparaíso, Chile, in the Pacific. Sightings have been made most commonly from the south of New Zealand, around the South Shetland Islands and off Tierra del Fuego, Argentina. The species is unlikely to be particularly densely populated close to these lands.

One survey estimated the population size at more than 140,000 individuals. 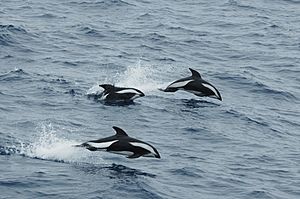 Hourglass dolphins tend to move in groups of about 5 to 10. One International Whaling Commission study recorded a group of 60. Claimed groups of up to 100 have been found.

They share feeding grounds with other cetaceans such as sei, pilot, bottlenose and minke whales and southern right whale dolphins. They are regularly seen with fin whales. Whalers who were hunting these much larger animals used hourglass dolphins as "look-outs" to aid them in their hunt. Hourglass dolphins are keen bow-wave riders.

Examinations of the stomach contents of the few specimens indicate they eat various (unrecorded) types of squid and small fish.

All content from Kiddle encyclopedia articles (including the article images and facts) can be freely used under Attribution-ShareAlike license, unless stated otherwise. Cite this article:
Hourglass dolphin Facts for Kids. Kiddle Encyclopedia.