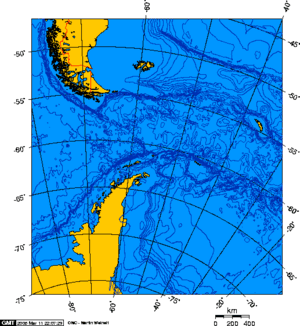 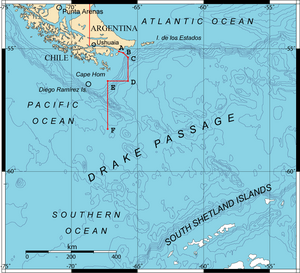 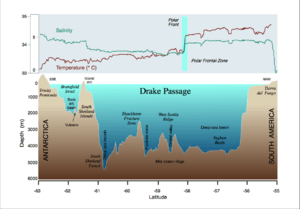 The Drake passage is a body of water. It lies between the Atlantic and Pacific oceans. To the north is Cape Horn and the South American continent, to the south are the South Shetland Islands, now part of the British Antarctic Territory. It is part of the Southern Ocean. It is named after the English privateer Sir Francis Drake, who accidentally discovered it. He never sailed the passage, because sailing the Strait of Magellan was less dangerous.

The Drake passage is also the shortest route from Antarctica to the rest of the world. The only islands in the passage are the Diego Ramirez Islands, about 60 km south of Cape Horn.

The passage is also known for very rough seas. Waves of 10 m are not uncommon here.

The passage is also good for seeing Whales, Dolphins, seabirds, and penguins.

In old books, the passage is called Drake Strait.

All content from Kiddle encyclopedia articles (including the article images and facts) can be freely used under Attribution-ShareAlike license, unless stated otherwise. Cite this article:
Drake Passage Facts for Kids. Kiddle Encyclopedia.