The British Antarctic Territory (BAT) is a sector of Antarctica claimed by the United Kingdom as one of its 14 British Overseas Territories, of which it is by far the largest by area. It comprises the region south of 60°S latitude and between longitudes 20°W and 80°W, forming a wedge shape that extends to the South Pole, overlapping the Antarctic claims of Argentina (Argentine Antarctica) and Chile (Chilean Antarctic Territory).

The Territory was formed on 3 March 1962, although the UK's claim to this portion of the Antarctic dates back to Letters patent of 1908 and 1917. The area now covered by the Territory includes three regions which, before 1962, were administered by the British as separate dependencies of the Falkland Islands: Graham Land, the South Orkney Islands, and the South Shetland Islands. Since the Antarctic Treaty came into force in 1961, Article 4 of which states "No acts or activities taking place while the present Treaty is in force shall constitute a basis for asserting, supporting or denying a claim to territorial sovereignty in Antarctica. No new claim, or enlargement of an existing claim, to territorial sovereignty shall be asserted while the present Treaty is in force." Most countries do not recognise territorial claims in Antarctica. The United Kingdom has ratified the treaty.

The United Kingdom has had a continuous presence in the far South Atlantic since 1833 when it reasserted sovereignty over the Falkland Islands. In 1908, the UK extended its territorial claim by declaring sovereignty over "South Georgia, the South Orkneys, the South Shetlands, the Sandwich Islands, and Graham's Land, situated in the South Atlantic Ocean and on the Antarctic continent to the south of the 50th parallel of south latitude, and lying between the 20th and the 80th degrees of west longitude". All these territories were administered as Falkland Islands Dependencies from Stanley by the Governor of the Falkland Islands.

The United Kingdom also claimed Victoria Land in 1841 and Enderby Land in 1930, however all territory between 160°E and 45°E was transferred to Australia in 1933.

In 1943, at the height of World War II, the UK undertook a military operation known as Operation Tabarin, to provide reconnaissance and meteorological information in the South Atlantic Ocean. This "secret" wartime project became the civilian Falkland Islands Dependencies Survey and later the British Antarctic Survey (BAS). BAS is responsible for most of the United Kingdom's scientific research in Antarctica. In the 1950s the Antarctic Treaty was negotiated to demilitarise the region and retain Antarctica – defined as all land and ice shelves south of 60°S latitude – for peaceful research purposes. The treaty was passed in 1961.

The Antarctic Treaty, signed by all relevant regional claimants, does not in itself either recognise or dispute any territorial claims, leaving this matter to individual signatories. Most of the world's countries do not recognise any national claims to Antarctica. Australia, France, New Zealand, Norway and the United Kingdom, all of whom have territorial claims on the continent, mutually recognise each other's claims. Argentina and Chile dispute the British claim, and make their own counter-claims that overlap both Britain's and each other's (see Argentine Antarctica and Chilean Antarctic Territory).

There are very few plants in the British Antarctic Territories; most of them are mosses and lichens, but there are also two flowering plants: the Antarctic hairgrass and Antarctic pearlwort. 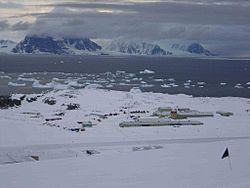 The British Antarctic Survey has two permanently staffed research stations in the Territory:

Signy was operated from 1947 until 1996 and now is only staffed in the summer. There are also two summer-only forward operating stations at Fossil Bluff and Sky Blu.

Faraday was maintained until 1996, when it was sold to Ukraine and renamed Akademik Vernadsky Station.

Since 1996, the historic base at Port Lockroy on Goudier Island has been staffed by the UK Antarctic Heritage Trust during the Antarctic summer. Receiving about 10,000 visitors a year, it is one of the most visited sites on the continent. Visitors can tour the museum, buy souvenirs, post mail, and view the large gentoo penguin colony.

Argentine presence in the territory dates to the foundation of the Orcadas Base, South Orkney Islands, in 1903.

A number of other nations maintain bases in the territory, many in the South Shetland Islands.

Despite the lack of permanent inhabitants, the British Antarctic Territory issues its own postage stamps. While some are actually used by visiting tourists and resident scientists, the bulk are sold overseas to collectors. The first issue came in 1963, an engraved set with 15 values ranging from ½d to one pound, featuring a portrait of Queen Elizabeth overlooking various scenes of human activity in Antarctica. Several additional issues in the 1960s were followed by a decimalisation issue in 1971 produced by overprinting the 1963 stamps.

In 2008–2009, as part of the celebrations of the centenary of the 1908 British territorial claim, the British Antarctic Territory issued its first ever legal-tender coin.

On 18 December 2012, the Foreign & Commonwealth Office announced that the southern part of British Antarctic Territory has been named Queen Elizabeth Land in honour of Queen Elizabeth II in her Diamond Jubilee year. The area, the southern third of the territory, has an area of about 437,000 square kilometres (169,000 sq mi) – almost twice the size of the United Kingdom – and is roughly triangular in shape, with the South Pole at one apex and with the 20°W and 80°W lines of longitude forming the eastern and western boundaries. The northern boundary is formed by the Filchner-Ronne Ice Shelf on the west and by Coats Land on the east.

The name "Queen Elizabeth Land" will be used in future on all British maps, but due to the unique status of Antarctica, it will be up to other countries to recognise the name if they see fit. Argentina, which lays claim to part of the area, criticised the naming.

All content from Kiddle encyclopedia articles (including the article images and facts) can be freely used under Attribution-ShareAlike license, unless stated otherwise. Cite this article:
British Antarctic Territory Facts for Kids. Kiddle Encyclopedia.