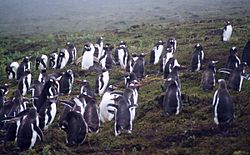 Gentoo colony on Carcass Island in the Falklands

The gentoo penguin (Pygoscelis papua) is a species of penguin easily recognized by the white stripe across its head. They are the largest penguins of the stiff-tailed family, which also makes them the largest penguin except the two giant penguins, the emperor penguin and the king penguin.

The gentoo penguin is easily recognized by the wide white stripe extending like a bonnet across the top of its head and its bright orange-red bill. It has pale whitish-pink webbed feet and a fairly long tail - the most prominent tail of all penguins. Chicks have grey backs with white fronts. As the gentoo penguin waddles along on land, its tail sticks out behind, sweeping from side to side, hence the scientific name Pygoscelis, which means "rump-tailed". The specific name 'papua is a misnomer; in the original description, Johann Reinhold Forster, a naturalist who had circumnavigated the world with Captain James Cook, falsely assumed that the species occurred in Papua New Guinea.

Gentoos reach a height of 51 to 90 cm (20 to 35 in), making them the third-largest species of penguin after the two giant species, the emperor penguin and the king penguin. Males have a maximum weight of about 8.5 kg (19 lb) just before molting, and a minimum weight of about 4.9 kg (11 lb) just before mating. For females, the maximum weight is 8.2 kg (18 lb) just before molting, but their weight drops to as little as 4.5 kg (9.9 lb) when guarding the chicks in the nest. Birds from the north are on average 700 g (1.5 lb) heavier and 10 cm (3.9 in) taller than the southern birds. Southern gentoo penguins reach 75–80 cm (30–31 in) in length. They are the fastest underwater swimming penguins, reaching speeds of 36 km/h (22 mph). Gentoos are adapted to very harsh cold climates. 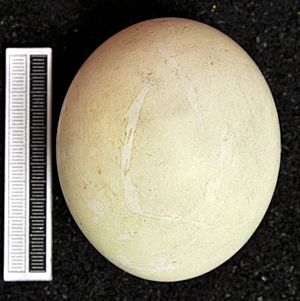 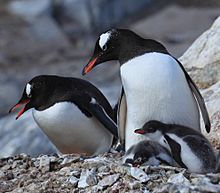 A family on Wiencke Island, Palmer Archipelago, off the coast of the Antarctic Peninsula.

The breeding colonies of gentoo penguins are located on ice-free surfaces. Colonies can be directly on the shoreline or can be located considerably inland. They prefer shallow coastal areas and often nest between tufts of grass. In South Georgia, for example, breeding colonies are 2 km inland. Whereas in colonies farther inland, where the penguins nest between tufts of grass, they shift location slightly every year because the grass may get trampled over time.

Gentoos breed on many sub-Antarctic islands. The main colonies are on the Falkland Islands, South Georgia, and Kerguelen Islands; smaller populations are found on Macquarie Island, Heard Islands, South Shetland Islands, and the Antarctic Peninsula. The total breeding population is estimated to be over 300,000 pairs. Nests are usually made from a roughly circular pile of stones and can be quite large, 20 cm (7.9 in) high and 25 cm (9.8 in) in diameter. The stones are jealously guarded and their ownership can be the subject of noisy disputes between individual penguins. They are also prized by the females, even to the point that a male penguin can obtain the favors of a female by offering her a nice stone.

Two eggs are laid, both weighing around 130 g (4.6 oz). The parents share incubation, changing duty daily. The eggs hatch after 34 to 36 days. The chicks remain in the nests for about 30 days before forming creches. The chicks molt into subadult plumage and go out to sea at about 80 to 100 days.

Gentoos live mainly on crustaceans, such as krill, with fish making up only about 15% of the diet. However, they are opportunistic feeders, and around the Falklands are known to take roughly equal proportions of fish, squat lobsters, and squid.

Because Gentoos live in the frozen Antarctic, there is not much fresh water available to them. Much of the Gentoos' diets are high in salt so to counteract this, they eat organisms that have relatively the same salinity as sea water. This can still lead to complications associated with high sodium concentrations in the body, especially for Gentoo chicks. To combat this, Gentoos, as well as many other marine bird species, have a highly developed salt gland located above their eyes that takes the high concentration of sodium within the body and produces a highly saline-concentrated solution that drips out of the body from the tip of the beak.

Gentoo penguins do not store as much fat as the Adelie penguin, their closest relative, because Gentoos require less energy investment when hunting. The net gain of energy after hunting is greater in Gentoos than Adelies, so Gentoos do not need large energy stores as adults. As embryos, Gentoos require a lot of energy in order to develop. Oxygen consumption is high for a developing Gentoo embryo. As the embryo grows and requires more oxygen, the amount of consumption increases exponentially until the Gentoo chick hatches. By then, the chick is consuming around 1800 mL O2 per day. 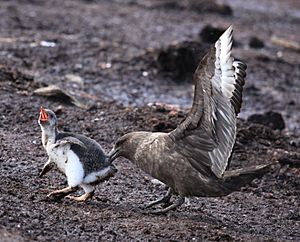 In the water, sea lions, leopard seals, and killer whales are all predators of the Gentoo. On land, no predators of full-grown Gentoo penguins exist. Skuas can steal their eggs; however, some other seabirds have managed to snatch their young. Skuas on King George Island have been observed attacking and injuring adult Gentoo penguins in apparent territorial disputes.

As of 2016[update], the IUCN Red List lists the Gentoo as least concern, although rapid declines in some key populations are believed to be driving a moderate overall decline in the species population. Examples include the population at Bird Island, South Georgia, where the population fell by two-thirds in 25 years.

All content from Kiddle encyclopedia articles (including the article images and facts) can be freely used under Attribution-ShareAlike license, unless stated otherwise. Cite this article:
Gentoo penguin Facts for Kids. Kiddle Encyclopedia.