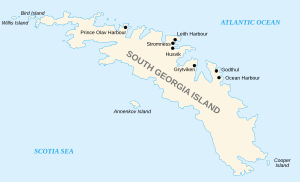 Bird Island is 4.8 kilometres (3 mi) long and 800 metres (875 yd) wide, separated from the western end of South Georgia by Bird Sound. It is an overseas territory of the United Kingdom, also claimed by Argentina as part of Tierra del Fuego province.

It was discovered in 1775 by a British expedition under James Cook, who so named it "on account of the vast numbers [of birds] that were upon it".

In the late 1950s, the island was the subject of a number of US funded projects. Between 1959-62, a great number of the island's wandering albatross were ringed, which gave startling data about their range - one bird was found in Australia .

The island has been a station for Antarctic research since 1963, and is currently a biological research station of the British Antarctic Survey (BAS) at Jordan Cove, with three resident biologists and one technician. The main focus of the research is the ecology and population of the island's seabirds and seals.

While the British Magistrate and other civilians and military present in Grytviken were removed from South Georgia during the Argentine occupation of South Georgia in 1982, another 15 Britons remained beyond Argentine reach. The losses suffered at Grytviken prevented Argentina from occupying the rest of the island, with Bird Island base, and field camps at Schlieper Bay, Lyell Glacier and St. Andrews Bay remaining under British control.

The island is currently a Site of Special Scientific Interest, and so there are no landings allowed without permission.

The summit of the island, Roché Peak is named after the Englishman Anthony de la Roché who discovered South Georgia in 1675.

2008 marked the 50th anniversary of biological research on Bird Island.

The island is home to:

This is in addition to several hundred thousand other birds, including gentoo penguins, South Georgia pintails and South Georgia pipits. Of South Georgia's 31 breeding species, 27 are found here. Cetaceans such as southern right whales can be seen on their feeding season in Subantarctic regions.

The island is rat-free, unlike the main island of South Georgia.

All content from Kiddle encyclopedia articles (including the article images and facts) can be freely used under Attribution-ShareAlike license, unless stated otherwise. Cite this article:
Bird Island, South Georgia Facts for Kids. Kiddle Encyclopedia.