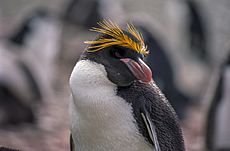 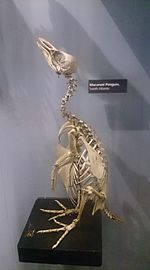 A skeleton on display in Manchester Museum

The macaroni penguin is a large, crested penguin, similar in appearance to other members of the genus Eudyptes. An adult bird has an average length of around 70 cm (28 in); the weight varies markedly depending on time of year and sex. Males average from 3.3 kg (7 lb) after incubating, or 3.7 kg (8 lb) after moult to 6.4 kg (14 lb) before moult, while females average 3.2 kg (7 lb) after to 5.7 kg (13 lb) before moult. Among standard measurements, the thick bill (from the gape) measures 7 to 8 cm (2.8 to 3.1 in), the culmen being around a centimetre less. The wing, from the shoulder to the tip, is around 20.4 cm (8.0 in) and the tail is 9–10 cm (3.5–3.9 in) long. The head, chin, throat, and upper parts are black and sharply demarcated against the white under parts. The black plumage has a bluish sheen when new and brownish when old. The most striking feature is the yellow crest that arises from a patch on the centre of the forehead, and extends horizontally backwards to the nape. The flippers are blue-black on the upper surface with a white trailing edge, and mainly white underneath with a black tip and leading edge. The large, bulbous bill is orange-brown. The iris is red and a patch of pinkish bare skin is found from the base of the bill to the eye. The legs and feet are pink. The male and female are similar in appearance; males tend to be slightly larger. Males also bear relatively larger bills, which average around 6.1 cm (2.4 in) compared to 5.4 cm (2.1 in) in females; this feature has been used to tell the sexes apart.

Immature birds are distinguished by their smaller size, smaller, duller-brown bill, dark grey chin and throat, and absent or underdeveloped head plumes, often just a scattering of yellow feathers. The crest is fully developed in birds aged three to four years, a year or two before breeding age.

Macaroni penguins moult once a year, a process in which they replace all of their old feathers. They spend around two weeks accumulating fat before moulting because they do not feed during the moult, as they cannot enter the water to forage for food without feathers. The process typically takes three to four weeks, which they spend sitting ashore. Once finished, they go back to sea and return to their colonies to mate in the spring. Overall survival rates are poorly known; the successful return of breeding adults at South Georgia Island varied between 49% and 78% over three years, and around 10% of those that did return did not breed the following year. 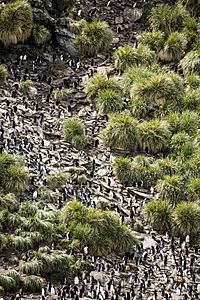 A 1993 review estimated that the macaroni was the most abundant species of penguin, with a minimum of 11,841,600 pairs worldwide. Macaroni penguins range from the Subantarctic to the Antarctic Peninsula; at least 216 breeding colonies at 50 sites have been recorded. In South America, macaroni penguins are found in southern Chile, the Falkland Islands, South Georgia and the South Sandwich Islands, and South Orkney Islands. They also occupy much of Antarctica and the Antarctic Peninsula, including the northern South Shetland Islands, Bouvet Island, the Prince Edward and Marion islands, the Crozet Islands, the Kerguelen Islands, and the Heard and McDonald Islands. While foraging for food, groups will range north to the islands off Australia, New Zealand, southern Brazil, Tristan da Cunha, and South Africa.

The population of macaroni penguins is estimated at around 18 million mature individuals; a substantial decline has been recorded in several locations. This includes a 50% reduction in the South Georgia population between the mid-1970s to mid-1990s, and the disappearance of the species from Isla Recalada in Southern Chile. This decline of the overall population in the last 30 years has resulted in the classification of the species as globally Vulnerable by the IUCN Red List of Threatened Species. Long-term monitoring programs are underway at a number of breeding colonies, and many of the islands that support breeding populations of this penguin are protected reserves. The Heard Islands and McDonald Islands are World Heritage Sites for the macaroni penguin. The macaroni penguin may be being impacted by commercial fishing and marine pollution. A 2008 study suggests the abilities of female penguins to reproduce may be negatively affected by climate- and fishing-induced reductions in krill density. 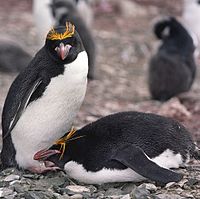 Like most other penguin species, the macaroni penguin is a social animal in its nesting and its foraging behaviour; its breeding colonies are among the largest and most densely populated. Scientist Charles Andre Bost found that macaroni penguins nesting at Kerguelen dispersed eastwards over an area exceeding 3×106 km2. Fitted with geolocation sensors, the 12 penguins studied travelled over 10,000 km (6,200 mi) during the six- to seven-month study period and spent their time largely within a zone 47–49°S and 70–110°E in the central Indian Ocean, not coming ashore once. This area, known as the Polar Frontal Zone, was notable for the absence of krill. 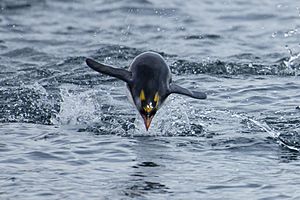 An individual porpoising in Cooper Bay

Living in colonies results in a high level of social interaction between birds, which has led to a large repertoire of visual, as well as vocal, displays. These behaviours peak early in the breeding period, and colonies particularly quieten when the male macaroni penguins are at sea. Agonistic displays are those which are intended to confront or drive off or, alternatively, appease and avoid conflict with other individuals. Macaroni penguins, particularly those on adjacent nests, may engage in 'bill-jousting'; birds lock bills and wrestle, each trying to unseat the other, as well as batter with flippers and peck or strike its opponent's nape. Submissive displays include the 'slender walk', where birds move through the colony with feathers flattened, flippers moved to the front of the body, and head and neck hunched, and general hunching of head and neck when incubating or standing at the nest. 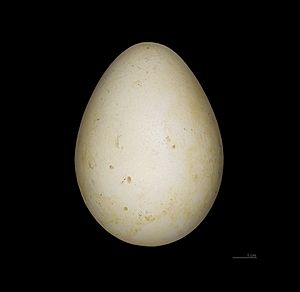 An egg from the Kerguelen Islands exhibited at Muséum de Toulouse 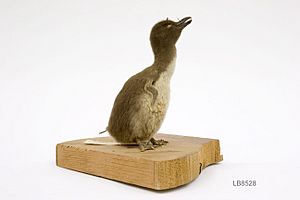 A preserved chick at the Auckland Museum

Adult macaroni penguins typically begin to breed late in October, and lay their eggs in early November. The nest itself is a shallow scrape in the ground which may be lined with some pebbles, stones, or grass, or nestled in a clump of tussock grass (on South Georgia Island). Nests are densely packed, ranging from around 66 cm apart in the middle of a colony to 86 cm at the edges. A fertile macaroni penguin will lay two eggs each breeding season. The first egg to be laid weighs 90–94 g (3.2–3.3 oz), 61–64% the size of the 145–155 g (5.1–5.5 oz) second, and is extremely unlikely to survive. The two eggs together weigh 4.8% of the mother's body weight; the composition of an egg is 20% yolk, 66% albumen, and 14% shell. Like those of other penguin species, the shell is relatively thick to minimise risk of breakage, and the yolk is large, which is associated with chicks born in an advanced stage of development. Some of the yolk remains at hatching and is consumed by the chick in its first few days.

The fate of the first egg is mostly unknown, but studies on the related royal penguin and erect-crested penguin show the female tips the egg out when the larger second egg is laid. The task of incubating the egg is divided into three roughly equal sessions of around 12 days each over a five-week period. The first session is shared by both parents, followed by the male returning to sea, leaving the female alone to tend the egg. Upon the male's return, the female goes off to sea and does not return until the chick has hatched. Both sexes fast for a considerable period during breeding; the male fasts for 37 days after arrival until he returns to sea for around 10 days before fasting while incubating eggs and young for another 36 days, and the female fasts for 42 days from her arrival after the male until late in the incubation period. Both adults lose 36–40% of their body weight during this period. The second egg hatches around 34 days after it is laid. Macaroni penguins typically leave their breeding colony by April or May to disperse into the ocean.

From the moment the egg is hatched, the male macaroni penguin cares for the newly hatched chick. For about 23 to 25 days, the male protects its offspring and helps to keep it warm, since only a few of its feathers have grown in by this time. The female brings food to the chick every one to two days. When they are not being protected by the adult male penguins, the chicks form crèches to keep warm and stay protected. Once their adult feathers have grown in at about 60 to 70 days, they are ready to go out to sea on their own.

The diet of the macaroni penguin consists of a variety of crustaceans, squid and fish; the proportions that each makes up vary with locality and season. Krill, particularly Antarctic krill (Euphausia superba), account for over 90% of food during breeding season. Cephalopods and small fish such as the marbled rockcod (Notothenia rossii), painted notie (Lepidonotothen larseni), Champsocephalus gunneri, the lanternfish species Krefftichthys anderssoni, Protomyctophum tenisoni and P. normani become more important during chick-rearing. Like several other penguin species, the macaroni penguin sometimes deliberately swallows small (10– to 30-mm-diameter) stones; this behaviour has been speculated to aid in providing ballast for deep-sea diving, or to help grind food, especially the exoskeletons of crustaceans which are a significant part of its diet.

Foraging for food is generally conducted on a daily basis, from dawn to dusk when they have chicks to feed. Overnight trips are sometimes made, especially as the chicks grow older; a 2008 study that used surgically implanted data loggers to track the movement of the birds showed the foraging trips become longer once the chick-rearing period is over. Birds venture out for 10–20 days during incubation and before the moult. Macaroni penguins are known to be the largest single consumer of marine resources among all of the seabirds, with an estimated take of 9.2 million tonnes of krill a year. Outside the breeding season, macaroni penguins tend to dive deeper, longer, and more efficiently during their winter migration than during the summer breeding season. Year round, foraging dives usually occur during daylight hours, but winter dives are more constrained by daylight due to the shorter days.

Foraging distance from colonies has been measured at around 50 km (31 mi) at South Georgia, offshore over the continental shelf, and anywhere from 59 to 303 kilometres (37 to 188 mi) at Marion Island. Macaroni penguins normally forage at depths of 15 to 70 m (49 to 230 ft), but have been recorded diving down to 100 m (330 ft) on occasions. Some night foraging does occur, but these dives are much shallower, ranging from only 3 to 6 m (9.8 to 19.7 ft) in depth. Dives rarely exceed two minutes in duration. All dives are V-shaped, and no time is spent at the sea bottom; about half the time on a foraging trip is spent diving. Birds have been calculated as catching from 4 to 16 krill or 40 to 50 amphipods per dive.

All content from Kiddle encyclopedia articles (including the article images and facts) can be freely used under Attribution-ShareAlike license, unless stated otherwise. Cite this article:
Macaroni penguin Facts for Kids. Kiddle Encyclopedia.