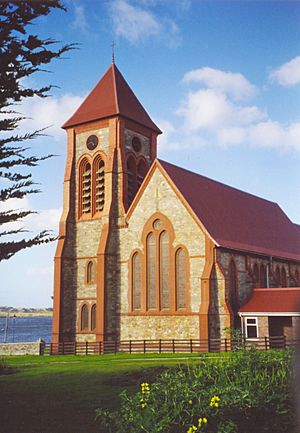 The Falkland Islands (or Islas Malvinas in Spanish) are a group of islands in the South Atlantic ocean, off the coast of South America. They are an overseas territory of the United Kingdom. Argentina disputes this, and claims their sovereignty.

The Falklands War was fought over their possession during Margaret Thatcher`s time as British Prime Minister. There are many islands in the group but the two biggest are East Falkland and West Falkland. About 3,000 people live on them. The people of the islands are British and speak English. The main income for the people is from fishing and sheep farming.

The Falkland Islands are about 300 miles (480 km) east of Argentina. Argentina and the UK had a short war in 1982 because Argentina claims to own the islands. The war lasted 6 weeks and about 1,000 soldiers were killed. The UK defeated Argentina and after this the governments of the two countries would not negotiate (talk) with each other. In 1990 they began to have talks again, but Argentina later refused to continue talks.

Oil and gas has been found below the sea around the islands. Argentina and the UK have agreed to share the oil and gas. There is also oil and gas outside the sea area that belongs to the UK. This is owned by Argentina.

The islands were discovered and occupied by Europeans. They were not inhabited until 1754, when a French captain landed and founded Port Louie. The British landed in 1766 and created a settlement at Port Egmont on Saunders Island. They did this in secret because they knew Spain and France would oppose such a settlement and that it violated existing treaties. Spain discovered and captured Port Egmont in 1770. War was avoided by Spain giving it back to Britain in 1771.

Later attempts by Spanish forces from the River Plate to seize Falklands were ended in 1833, when British forces took control. In 1840 the Falkland Islands became a Crown Colony of the British nation. 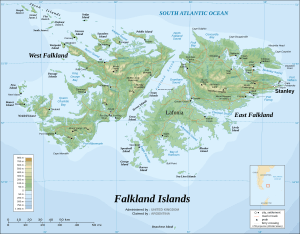 Map of the Falkland Islands

The Falkland Islands have a land area of 4,700 square miles (12,000 km2) and a coastline estimated at 800 miles (1,300 km). Two main islands, West Falkland and East Falkland, and about 776 smaller islands constitute the archipelago. The islands are predominantly mountainous and hilly, with the major exception the depressed plains of Lafonia (a peninsula forming the southern part of East Falkland). The Falklands are continental crust fragments resulting from the break-up of Gondwana and the opening of the South Atlantic that began 130 million years ago. The islands are located in the South Atlantic Ocean, on the Patagonian Shelf, about 300 miles (480 km) east of Patagonia in southern Argentina.

The Falklands are situated approximately at latitude 51°40′ – 53°00′ S and longitude 57°40′ – 62°00′ W. The archipelago's two main islands are separated by the Falkland Sound, and its deep coastal indentations form natural harbours. East Falkland houses Stanley (the capital and largest settlement), the UK military base at RAF Mount Pleasant, and the archipelago's highest point: Mount Usborne, at 2,313 feet (705 m). Outside of these significant settlements is the area colloquially known as "Camp", which is derived from the Spanish term for countryside (Campo).

The climate of the islands is cold, windy and humid maritime. Variability of daily weather is typical throughout the archipelago. Rainfall is common over half of the year, averaging 610 millimetres (24 in) in Stanley, and sporadic light snowfall occurs nearly all year. The temperature has historically stayed between 21.1 and −11.1 °C (70.0 and 12.0 °F) in Stanley, with mean monthly temperatures varying from 9 °C (48 °F) early in the year to −1 °C (30 °F) in July. Strong westerly winds and cloudy skies are common. Although numerous storms are recorded each month, conditions are normally calm. 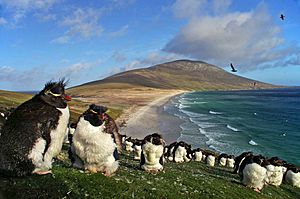 The Falkland Islands are a biogeographical part of the mild Antarctic zone, with strong connections to the flora and fauna of Patagonia in mainland South America. Land birds make up most of the Falklands' avifauna; 63 species breed on the islands, including 16 endemic species. There is also abundant arthropod diversity on the islands. The Falklands' flora consists of 163 native vascular species. The islands' only native terrestrial mammal, the warrah, was hunted to extinction by European settlers.

The islands are frequented by marine mammals, such as the southern elephant seal and the South American fur seal, and various types of cetaceans; offshore islands house the rare striated caracara. The Falklands are also home to five different penguin species and a few of the largest albatross colonies on the planet. Endemic fish around the islands are primarily from the genus Galaxias. The Falklands are treeless and have a wind-resistant vegetation predominantly composed of a variety of dwarf shrubs.

Virtually the entire land area of the islands is used as pasture for sheep. Introduced species include reindeer, hares, rabbits, Patagonian foxes, brown rats and cats. The detrimental impact several of these species have caused to native flora and fauna has led authorities to attempt to contain, remove or exterminate invasive species such as foxes, rabbits and rats. Endemic land animals have been the most affected by introduced species. The extent of human impact on the Falklands is unclear, since there is little long-term data on habitat change. 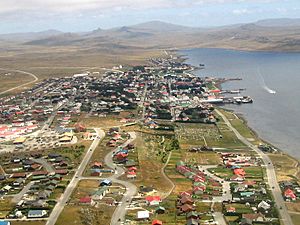 Stanley is the financial centre of the Falkland Islands' economy.

Economic development was advanced by ship resupplying and sheep farming for high-quality wool. The main sheep breeds in the Falkland Islands are Polwarth and Corriedale. During the 1980s, although synthetic fibres and ranch underinvestment hurt the sheep-farming sector, the government established a major revenue stream with the establishment of an exclusive economic zone and the sale of fishing licenses to "anybody wishing to fish within this zone". Since the end of the Falklands War in 1982, the islands' economic activity has increasingly focused on oil field exploration and tourism.

The primary sector of the economy accounts for most of the Falkland Islands' gross domestic product, with the fishing industry alone contributing between 50% and 60% of annual GDP; agriculture also contributes significantly to GDP and employs about a tenth of the population. A little over a quarter of the workforce serves the Falkland Islands government, making it the archipelago's largest employer.

Tourism, part of the service economy, has been spurred by increased interest in Antarctic exploration and the creation of direct air links with the United Kingdom and South America. Tourists, mostly cruise ship passengers, are attracted by the archipelago's wildlife and environment, as well as activities such as fishing and wreck diving; the majority are based in accommodation found in Stanley. The islands' major exports include wool, hides, venison, fish and squid; its main imports include fuel, building materials and clothing. 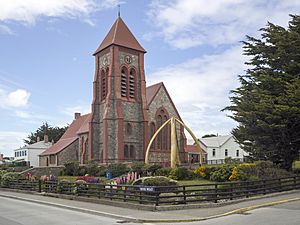 The Christ Church Cathedral, the local parish church of the Anglican Communion. Most Falklanders identify themselves as Christian.

The Falkland Islands are a homogeneous society, with the majority of inhabitants descended from Scottish and Welsh immigrants who settled the territory in 1833.

The 2006 census listed some Falklands residents as descendants of French, Gibraltarians and Scandinavians. That census indicated that one-third of residents were born on the archipelago, with foreign-born residents assimilated into local culture. The legal term for the right of residence is "belonging to the islands". The British Nationality Act of 1983 gave British citizenship to Falkland Islanders.

A significant population decline affected the archipelago in the twentieth century, with many young islanders moving overseas in search of education, a modern lifestyle, and better job opportunities, particularly to the British city of Southampton, which came to be nicknamed "Stanley north". In recent years, the island's population decline has steadied, thanks to immigrants from the United Kingdom, Saint Helena, and Chile. In the 2012 census, a majority of residents listed their nationality as Falkland Islander (59 percent), followed by British (29 percent), Saint Helenian (9.8 percent), and Chilean (5.4 percent). A small number of Argentines also live on the islands.

The Falkland Islands have a low population density. According to the 2012 census, the average daily population of the Falklands was 2,932, excluding military personnel serving in the archipelago and their dependents. 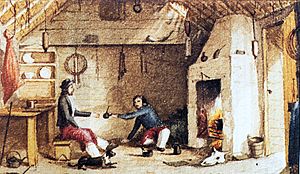 Gauchos from mainland South America, such as these two men having mate at Hope Place in East Falkland, influenced the local dialect

Falklands culture is based on the cultural traditions brought by its British settlers, and it has also been influenced by the cultures of Hispanic South America. Some terms and place names used by the islands' former Gaucho inhabitants are still applied in local speech. The Falklands' predominant and official language is English, with the foremost dialect being British English; nonetheless, inhabitants also speak Spanish and other languages. According to naturalist Will Wagstaff, "the Falkland Islands are a very social place, and stopping for a chat is a way of life".

The islands have two weekly newspapers: Teaberry Express and The Penguin News, and television and radio broadcasts generally feature programming from the United Kingdom. Wagstaff describes local cuisine as "very British in character with much use made of the homegrown vegetables, local lamb, mutton, beef, and fish". Common between meals are "home made cakes and biscuits with tea or coffee". Social activities are, according to Wagstaff, "typical of that of a small British town with a variety of clubs and organisations covering many aspects of community life".

All content from Kiddle encyclopedia articles (including the article images and facts) can be freely used under Attribution-ShareAlike license, unless stated otherwise. Cite this article:
Falkland Islands Facts for Kids. Kiddle Encyclopedia.