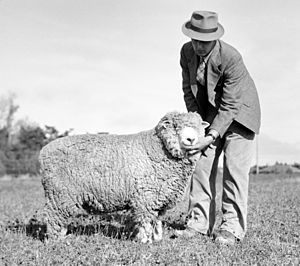 Corriedale sheep are a dual purpose breed, meaning they are used both in the production of wool and meat. The Corriedale is the oldest of all the crossbred breeds, a Merino-Lincoln cross developed almost simultaneously in Australia and New Zealand and first brought to the United States in 1914. The Corriedale is internationally farmed, in Australia, New Zealand, the United States of America, Southern Brazil, Uruguay and Patagonia. Corriedales are one of the most popular sheep breeds in Uruguay. On the Falkland Islands, Polwarth and Corriedale form the main sheep breeds.

Corriedale have a long life span, and are hardy and evenly balanced all over the body. Corriedales are docile, easy care mothers, with high fertility. They adapt well to a wide range of climate conditions. They are large framed and plain bodied, polled (hornless) and have a broad body. Corriedales produce a thick stapled, bulky fleece, which is popular with spinners and can be used for a range of handspun garments. Their dense fleece is medium-fine and high yielding, with good length and softness, somewhat between medium wool and long wool. Corriedale lambs produce good quality carcasses and have a high pelt value. 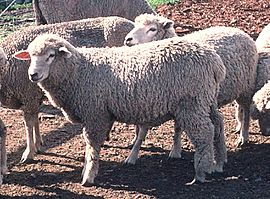 Corriedale sheep on a ranch in Charlo, Mission Valley, Montana

This breed was developed in Australia and New Zealand by extensive breeding and culling as a cross between Merino and Lincoln sheep. The goal was to develop a breed that would thrive in lower rainfall areas and supply long-staple wool. James Little was the original breeder. The name comes from a property in the South Island, where he conducted his work under the encouragement of NZALC superindent, William Soltau Davidson.

The breed was developed between 1868 and 1910. As a dual purpose breed of sheep (good for meat and wool), the Corriedale breed was gradually distributed to many of the sheep-raising areas in the world. For example, the first Corriedales were imported to the United States in 1914. The Corriedale was later used as one of the parents of the U.S.-developed Targhee breed. Corriedale sheep also contribute about 50 percent of the genetics used in the Gromark breed of sheep, which were developed in Australia.

All content from Kiddle encyclopedia articles (including the article images and facts) can be freely used under Attribution-ShareAlike license, unless stated otherwise. Cite this article:
Corriedale Facts for Kids. Kiddle Encyclopedia.