Coordinates: 46°S 63°W﻿ / ﻿46°S 63°W﻿ / -46; -63 The Patagonian or Argentine Shelf is part of the South American continental shelf belonging to the Argentine Sea on the Atlantic seaboard, south of about 35°S. It adjoins the coasts of Uruguay, Argentina and the Falkland Islands. Various authorities quote different dimensions of the shelf, depending on how they define its limits. Quoted statistics cites its area as being from 1.2 to 2.7 million square kilometres and its maximum width as being between 760 and 850 kilometres. The shelf itself can be divided into a 100 km band where the seabed slopes at about 1 m/km then a wide plain (250 to 450 km wide) where the seabed slopes gently to 200 m isobath. Apart from the Falklands Plateau (which lies to the east of the Falkland Islands), the seabed then falls by up to 10 m/km to 2000 m and more. 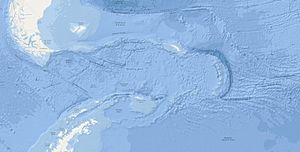 Bathymetry of the Falklands plateau and Scotia Arc

The Falklands Trough separates the Patagonian Shelf from the Scotia Arc.

All content from Kiddle encyclopedia articles (including the article images and facts) can be freely used under Attribution-ShareAlike license, unless stated otherwise. Cite this article:
Patagonian Shelf Facts for Kids. Kiddle Encyclopedia.