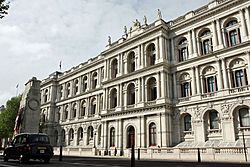 The Foreign Office in Whitehall

The Foreign and Commonwealth Office (or Foreign Office) is a ministry of the Government of the United Kingdom. Its job it is to protect British interests around the world.

The head of the department is known as the Secretary of State for Foreign and Commonwealth Affairs, which is usually shortened to "Foreign Secretary". This position is one of the four most important in the government's Cabinet. Jeremy Hunt is the current Foreign Secretary of the UK.

All content from Kiddle encyclopedia articles (including the article images and facts) can be freely used under Attribution-ShareAlike license, unless stated otherwise. Cite this article:
Foreign and Commonwealth Office Facts for Kids. Kiddle Encyclopedia.