Cristina Elisabet Fernández de Kirchner (February 19, 1953), also called Cristina Fernández or Cristina Kirchner, is an Argentine attorney and politician. She has been the Vice President of Argentina since 2019. She was the President of Argentina from 2007 to 2015. She was born in La Plata, Buenos Aires Province. She is the daughter of Eduardo Fernandez ( of Spanish descent) a bus driver, and Ofelia Esther Wilhelm (of German descent). She is a lawyer and she was married to former Argentinian president Néstor Kirchner from 1975 until his death in 2010.

In October 2019, she was elected Vice President with Alberto Fernández as President. 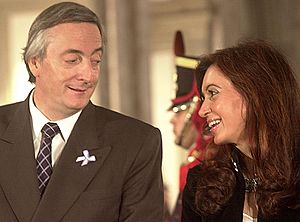 Cristina with husband Néstor in 2004.

All content from Kiddle encyclopedia articles (including the article images and facts) can be freely used under Attribution-ShareAlike license, unless stated otherwise. Cite this article:
Cristina Fernández de Kirchner Facts for Kids. Kiddle Encyclopedia.