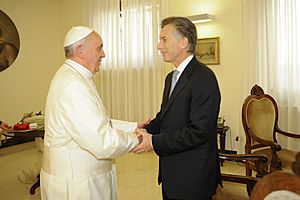 On 22 November 2015, after a tie in the first round of presidential elections on 25 October, Macri won the first ballotage in Argentina's history, beating Front for Victory candidate Daniel Scioli and becoming president-elect. He was inaugurated on 10 December 2015.

Running for president when the Argentine economy was not performing well, Macri campaigned on a platform of change, and promised to pass free market reforms of the economy. Macri made major economic changes as soon as he entered office, hoping to help create jobs. He also is changing the country's foreign policy. While the president that came before him, Cristina Fernandez de Kirchner, had criticized the United States' policies, Macri has improved relations. In 2016, Barack Obama visited Argentina. The two talked about improving relations, issues in the hemisphere, and an apology from the United States for its support of the dictatorship in Argentina (as well as in several other Latin American countries) in the 1970s and 80s.

Macri has been critical of the government of Nicolas Maduro, and feels that the Venezuelan President is undemocratic and oppressive.

Macri lost his re-election bid in the 2019 election to Alberto Fernández and left office on 10 December 2019.

All content from Kiddle encyclopedia articles (including the article images and facts) can be freely used under Attribution-ShareAlike license, unless stated otherwise. Cite this article:
Mauricio Macri Facts for Kids. Kiddle Encyclopedia.