Constitution of Argentina facts for kids

The constitution of Argentina is one of the main sources of existing law in Argentina. Its first version was written in 1853 by a Constitutional Assembly gathered in Santa Fe. The basis was taken in part from the United States Constitution. It was then changed in 1860, 1866, 1898, 1949, 1957. The present version is the text of 1994. 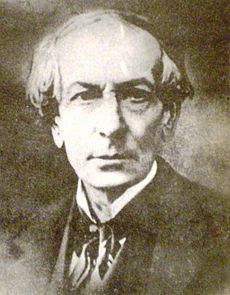 Juan Bautista Alberdi, the person who wrote the 1853 Constitution.

The first government was made after the May Revolution. Many revolutionary leaders, led by Mariano Moreno, wanted to declare independence immediately. There were problems between the two main parties. Finally the federal constitution was made on May 1, 1853.

All content from Kiddle encyclopedia articles (including the article images and facts) can be freely used under Attribution-ShareAlike license, unless stated otherwise. Cite this article:
Constitution of Argentina Facts for Kids. Kiddle Encyclopedia.