May Revolution facts for kids 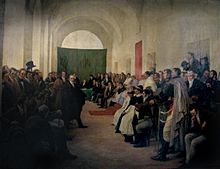 The May Revolution happened from May 18 to 25, 1810, in Buenos Aires. Buenos Aires was the capital of the Viceroyalty of the Río de la Plata. It was a Spanish colony that included roughly the territories of present-day Argentina, Bolivia, Paraguay and Uruguay. The result was the removal of Viceroy Baltasar Hidalgo de Cisneros and the forming of a local government now called the "Primera Junta". In Argentina this is now celebrated as "May Week" (Spanish: Semana de Mayo).

The May Revolution was a direct reaction to Spain's Peninsular War of the previous two years. In 1808, King Ferdinand VII of Spain abdicated in favor of Napoleon. Napoleon gave the throne to his brother, Joseph Bonaparte.

All content from Kiddle encyclopedia articles (including the article images and facts) can be freely used under Attribution-ShareAlike license, unless stated otherwise. Cite this article:
May Revolution Facts for Kids. Kiddle Encyclopedia.