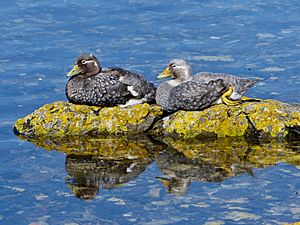 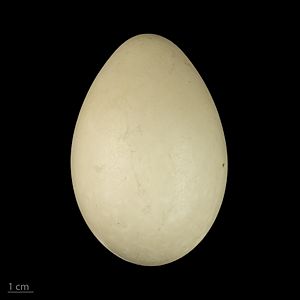 Charles Darwin devoted two paragraphs to this bird (or the similar flying steamer duck) in The Voyage of the Beagle, having observed them at the Falkland Islands in 1833:

In these islands a great loggerheaded duck or goose (Anas brachyptera), which sometimes weighs twenty-two pounds, is very abundant. These birds were in former days called, from their extraordinary manner of paddling and splashing upon the water, race-horses; but now they are named, much more appropriately, steamers. Their wings are too small and weak to allow of flight, but by their aid, partly swimming and partly flapping the surface of the water, they move very quickly. The manner is something like that by which the common house-duck escapes when pursued by a dog; but I am nearly sure that the steamer moves its wings alternately, instead of both together, as in other birds. These clumsy, loggerheaded ducks make such a noise and splashing, that the effect is exceedingly curious.

Thus we find in South America three birds which use their wings for other purposes besides flight; the penguins as fins, the steamer as paddles, and the ostrich as sails: and the Apteryz of New Zealand, as well as its gigantic extinct prototype the Deinornis, possess only rudimentary representatives of wings. The steamer is able to dive only to a very short distance. It feeds entirely on shell-fish from the kelp and tidal rocks: hence the beak and head, for the purpose of breaking them, are surprisingly heavy and strong: the head is so strong that I have scarcely been able to fracture it with my geological hammer; and all our sportsmen soon discovered how tenacious these birds were of life. When in the evening pluming themselves in a flock, they make the same odd mixture of sounds which bull-frogs do within the tropics.

—Charles Darwin, The Voyage of the Beagle

All content from Kiddle encyclopedia articles (including the article images and facts) can be freely used under Attribution-ShareAlike license, unless stated otherwise. Cite this article:
Falkland steamer duck Facts for Kids. Kiddle Encyclopedia.