The Voyage of the Beagle facts for kids 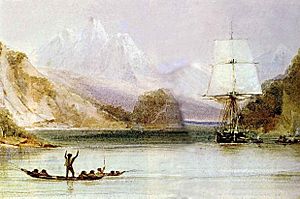 A watercolour by HMS Beagle's draughtsman, Conrad Martens. Painted during the survey of Tierra del Fuego, it depicts the Beagle being hailed by native Fuegians.

The Voyage of the Beagle is the usual title of the book written by Charles Darwin. He first published it in 1839 as his Journal and Remarks.

The title refers to the second survey expedition of the ship HMS Beagle. The ship set sail from Plymouth Sound on 27 December 1831 under the command of Captain Robert FitzRoy R.N.

The expedition was originally planned to last two years, but it lasted almost five. The Beagle did not return until 2 October 1836. Darwin spent most of this time exploring on land (three years and three months on land; 18 months at sea). The ship dropped him off at various places and picked him up later.

The book is a vivid and exciting travel memoir as well as a detailed scientific field journal. It includes biology, geology, and anthropology. Darwin's observations were written at a time when Western Europeans were exploring and charting the whole world. Although Darwin revisited some areas during the expedition, for clarity the chapters of the book are ordered by places and locations rather than by date.

Darwin's notes made during the voyage include comments illustrating his thinking. Looking at the plants, animals, rocks and fossils, he ran across questions which he could not answer at the time. On his way back, ideas began in his mind which he developed later as his theory of evolution by natural selection. The second edition of 1845 includes some suggestion of this.

Later, he realised he had made a big mistake in not noting which islands some specimens from the Galapagos Islands were found on. He knew this was a mistake because he had sensed how islands were rather like the higher parts of mountains, which also have many unique species. The idea we now know as geographical speciation was beginning to form in his mind. Darwin opened his secret 'transmutation' notebook (Notebook 'B') in July 1837, less than a year after the Beagle returned to England.

All content from Kiddle encyclopedia articles (including the article images and facts) can be freely used under Attribution-ShareAlike license, unless stated otherwise. Cite this article:
The Voyage of the Beagle Facts for Kids. Kiddle Encyclopedia.