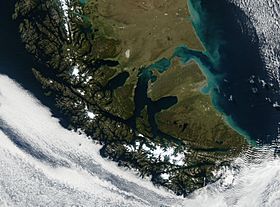 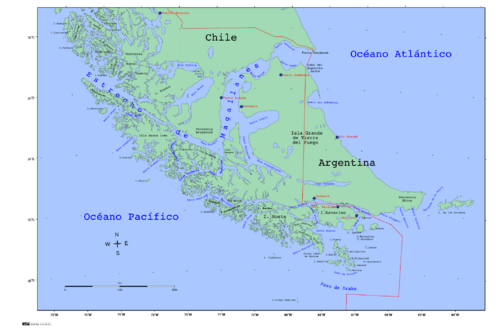 A schematic of the Magellan Strait, showing the archipelago

Tierra del Fuego is an archipelago at the southern tip of South America. The Magellan Strait sepearates it from the South American Mainland. The archipelago consists of a big island, Isla Grande de Tierra del Fuego and a number of smaller islands. The land area of the archipelago is 73.746 square kilometers. With about 47.000 square kilometers, Isla Grande takes roughly half of the total land mass. The Archipelago (and the main island) is divided between Argentina and Chile. About 127.000 people live in the part belonging to Argentina, about 8.000 in that belonging to Chile. The Argentine part is called Tierra del Fuego Province, the Chilenan part has the name Magellanes. The biggest cities on the main island are Rio Grande, 57.000 people, and Ushuaia in the Argentine part, and Porvenir with 5.700 inhabitants in the Chilenan part. Puerto Williams, with 2300 people, is the most southern city in the world.

All content from Kiddle encyclopedia articles (including the article images and facts) can be freely used under Attribution-ShareAlike license, unless stated otherwise. Cite this article:
Tierra del Fuego Facts for Kids. Kiddle Encyclopedia.