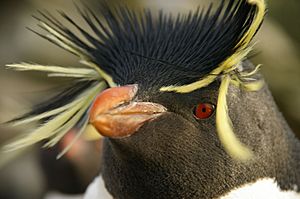 This is the smallest yellow-crested, black-and-white penguin in the genus Eudyptes. It reaches a length of 45–58 cm (18–23 in) and typically weighs 2–3.4 kg (4.4–7.5 lb), although there are records of exceptionally large rockhoppers weighing 4.5 kg (9.9 lb). It has slate-grey upper parts and has straight, bright yellow eyebrows ending in long yellowish plumes projecting sideways behind a red eye.

Interbreeding with the macaroni penguin has been reported at Heard and Marion Islands, with three hybrids recorded there by a 1987–88 Australian National Antarctic Research Expedition. 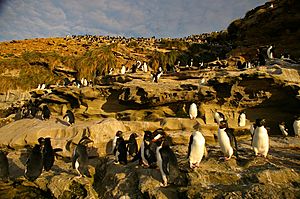 The southern rockhopper penguin group has a global population of roughly 1 million pairs. About two-thirds of the global population belongs to E. c. chrysocome which breeds on the Falkland Islands and on islands off Patagonia. These include most significantly Isla de los Estados, the Ildefonso Islands, the Diego Ramírez Islands and Isla Noir. E. c. filholi breeds on the Prince Edward Islands, the Crozet Islands, the Kerguelen Islands, Heard Island, Macquarie Island, Campbell Island, the Auckland Islands and the Antipodes Islands. Outside the breeding season, the birds can be found roaming the waters offshore their colonies.

A rockhopper penguin, named Rocky, in Bergen Aquarium in Norway, lived to 29 years 4 months. It died in October 2003. This stands as the age record for rockhopper penguins, and possibly it was the oldest penguin known. 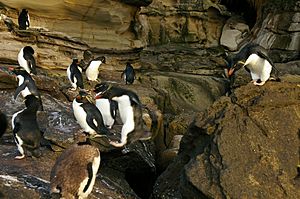 Their common name refers to the fact that, unlike many other penguins which get around obstacles by sliding on their bellies or by awkward climbing using their flipper-like wings as aid, rockhoppers will try to jump over boulders and across cracks.

This behaviour is by no means unique to this species however – at least the other "crested" penguins of the genus Eudyptes hop around rocks too. But the rockhopper's congeners occur on remote islands in the New Zealand region, whereas the rockhopper penguins are found in places that were visited by explorers and whalers since the Early Modern era. Hence, it is this particular species in which this behaviour was first noted. 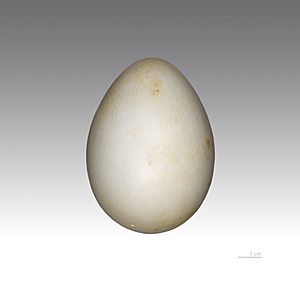 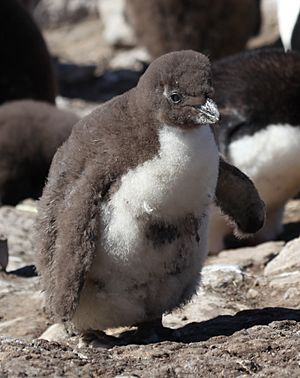 A chick on the Saunders Island in the Falkland Islands

Their breeding colonies are located from sea level to cliff-tops and sometimes inland. Their breeding season starts in September and ends in November. Two eggs are laid but only one is usually incubated. Incubation lasts 35 days and their chicks are brooded for 26 days.

Rockhopper penguins are known to have complex foraging behaviors. Influenced by factors such as sea ice abundance, prey availability, breeding stage, and seasonality, rockhopper penguins must be able to adapt their behavior to fit the current conditions. Rockhopper penguins employ different strategies according to their conditions. When making foraging trips, rockhoppers typically leave and return to their colonies in groups. One study showed they are known for going up to 157 km away from their colonies when foraging. Females typically forage during the day in 11-12h trips consisting of many dives, but they will occasionally forage at night. Night dives are typically much shallower than day dives. Dives typically last around 12h, but can be up to 15hrs, with penguins leaving the colony around dawn (04:00) and returning at dusk (19:00). 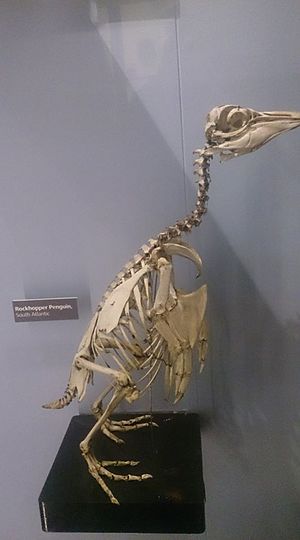 Rockhopper penguins employ different strategies and foraging behaviors depending on the climate and environment. A main factor is food location. Subantarctic penguins must dive for longer periods of time and much deeper in search of food than do species in warmer waters where food is more easily accessible.

Rockhopper penguins are known to employ two different types of dives when foraging, pelagic and benthic dives. Pelagic dives are typically short and relatively shallow and used very frequently. Benthic dives are much deeper dives near the seafloor (up to 100 m deep) that typically last longer and have longer bottom time. Penguins performing benthic dives typically only perform a few depth wiggles at their maximum depth. at an average speed of range of 6.9–8.1 kilometres per hour (6,900–8,100 m/h). Although deeper dives tend to be a bit longer than shallow dives, foraging rockhoppers will minimize their travel time when performing benthic dives in order to gain maximum efficiency. Benthic dives in particular show a stronger correlation to full stomachs than pelagic dives. Emperor penguins, gentoo penguins, yellow-eyed penguins and king penguins also use this deep-dive technique to obtain food.

Prey availability is dependent on many factors, such as current climate and conditions of the area. Typically, females will bring back a majority of crustaceans and occasionally some fish for their young. The female's foraging success directly affects chick growth. If food is scarce, females are able to fast for very long periods of time and sometimes will only forage for the chick's benefit.

Because foraging conditions and outcomes are so variable, several factors can limit foraging practices. The timing of breeding, incubation and brooding periods greatly affect foraging time, as females are unable to leave broods for long periods of time. Females during the brooding period will follow a much more fixed foraging schedule, leaving and returning to the colony at roughly the same time each day. When not in breeding season, females have much more variability in the length of foraging trips. If females have low energy levels because they are fasting while provisioning chicks, they may make several short foraging trips instead of one longer one.

While benthic dives are efficient and favorable for rockhoppers, they present physiological limitations such as limits in lung capacity, which affects duration of dives. The longest aerobic dive rockhoppers can perform is about 110 seconds long, but dives can last upwards of 180–190 seconds.

The southern rockhopper penguin group is classified as vulnerable by the IUCN. Its population has declined by about one-third in the last thirty years. This decline has earned them the classification of a vulnerable species by the IUCN. Threats to their population include commercial fishing and oil spills.

With the approval of the European Association of Zoos and Aquaria (EAZA), Drusillas Park in East Sussex holds the studbook for rockhopper penguins in Europe. Zoo manager Sue Woodgate has specialist knowledge of the species, so the zoo is responsible for co-ordinating the movements of penguins within zoos in Europe to take part in breeding programmes and offer their advice and information about the species. 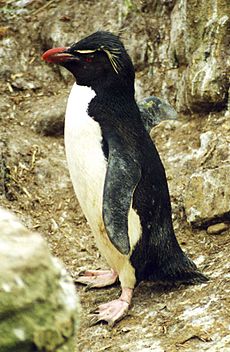 Rockhopper penguins are the most familiar of the crested penguins to the general public. Their breeding colonies, namely those around South America, today attract many tourists who enjoy watching the birds' antics. Historically, the same islands were popular stopover and replenishing sites for whalers and other seafarers since at least the early 18th century. Almost all crested penguins depicted in movies, books and other media are ultimately based on Eudyptes chrysocome chrysocome.

All content from Kiddle encyclopedia articles (including the article images and facts) can be freely used under Attribution-ShareAlike license, unless stated otherwise. Cite this article:
Southern rockhopper penguin Facts for Kids. Kiddle Encyclopedia.