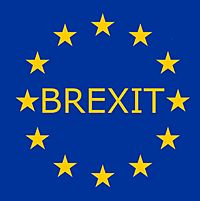 Brexit is a movement that promotes that the United Kingdom (UK) leave the European Union (EU). The name "Brexit" is a portmanteau (merging two words together) of "British" and "exit".

In 2019, the House of Commons three times rejected agreements to leave. After new elections, the United Kingdom left the European Union on 31 January, 2020.

Below is a timeline of major events relating to Brexit.

All content from Kiddle encyclopedia articles (including the article images and facts) can be freely used under Attribution-ShareAlike license, unless stated otherwise. Cite this article:
Brexit Facts for Kids. Kiddle Encyclopedia.