The Leopard seal (Hydrurga leptonyx) is the second largest species of seal in the Antarctic (after the Southern Elephant Seal). It is most common in the southern hemisphere along the coast of Antarctica and on most sub-Antarctic islands, but can also be found on the coasts of southern Australia, Tasmania, South Africa, New Zealand, Lord Howe Island, Tierra del Fuego, the Cook Islands, and the Atlantic coast of South America.

They can live twenty-six years, possibly more. Orcas and large sharks are the only natural predators of leopard seals. They eat Crabeater seals, consuming 80% of their young. They are large and strong. They have a dark grey back and a light grey stomach. Its neck is a little bit white with black spots, which is the pattern of a leopard's coat. They eat fish, squid, krill and many other sea creatures. 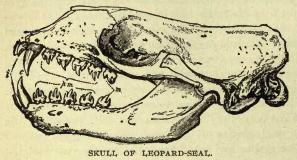 The skull of the leopard seal

The leopard seal has a distinctively long and muscular body shape, when compared to other seals. This species of seal is known for its massive head and jaws that allow it to be one of the top predators in its environment. A notable key feature of leopard seals are their counter-shaded coats. A counter-shaded coat is when the dorsal side of the coat is darker than ventral side. So, in leopard seals they have a silver to dark gray blended coat that make up its distinctive "leopard" coloration that make a spotted pattern. Whereas, the ventral side of the coat are paler in color- ranging from white to light gray. Females are slightly larger than the males. The overall length of this seal is 2.4–3.5 m (7.9–11.5 ft) and weight is from 200 to 600 kilograms (440 to 1,320 lb). They are about the same length as the northern walrus, but usually less than half the weight.

Another notable characteristic of leopard seals are their short clear whiskers that are used to sense their environment. Leopard seals have an enormous mouth relative to their body sizes. The front teeth are sharp like those of other carnivores, but its molars lock together in a way that allows them to sieve krill from the water, in the manner of the crabeater seal. Since leopard seals are "true" seals, they do not have external pinnae, but they do have an internal ear canal that leads to an external opening. Their hearing in air is similar to that of a human, but scientists have noted that leopard seals use their ears in conjunction with their whiskers to track prey under water.

The leopard seal lives in the waters surrounding the Antarctic continent. Sightings range as far north as the southern coasts of Australia, New Zealand, South America, and South Africa. Higher densities of leopard seals are seen in the Western Antarctic than in other regions. Most leopard seals remain within the pack ice throughout the year and remain solitary during most of their lives with the exception of a mother and her newborn pup. These matrilineal groups can move further north in the austral winter to sub-antarctic islands and the coastlines of the southern continents to provide care for their pups. While solitary animals may appear in areas of lower latitudes, females rarely breed there. Some researchers believe this is due to safety concerns for the pups. Lone male leopard seals hunt other marine mammals and penguins in the packed ice of antarctic waters. The estimated population of this species ranges from 220,000 to 440,000 individuals, which puts leopard seals at "least concern". Although with an abundance of leopard seals in the antarctic, they are difficult to survey by traditional visual techniques because they spend long periods of time vocalizing under the water during the austral spring and summer - when visual surveys are carried out. This trait of vocalizing underwater for long periods has made them available to acoustic surveys, allowing researchers to gather most of what is known about them. 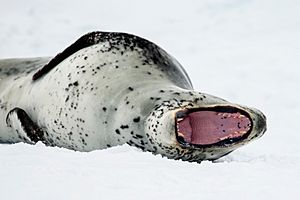 Leopard seals are very vocal underwater during the austral summer. The male seals produce loud calls (153 to 177 dB re 1 μPa at 1 m) for many hours each day. While singing the seal hangs upside down and rocks from side to side under the water. Their back is bent, the neck and cranial thoracic region (the chest) is inflated and as they call their chest pulses. The male calls can be split into two categories: vocalizing and silencing, in which vocalizing is when they are making noises underwater, and silencing noted as the breathing period at the air surface. Adult male leopard seals have only a few stylized calls, some are like bird or cricket-like trills yet others are low haunting moans. However, scientists have identified five distinctive sounds that male leopard seals make, which include: the high double trill, medium single trill, low descending trill, low double trill, and a hoot with a single low trill. These cadence of calls are believed to be a part of a long range acoustic display for territorial purposes, or the attraction of a potential mate. The leopard seals have age-related differences in their calling patterns, just like birds. Where the younger male seals have many different types of variable calls – the adult male seals have only a few, highly stylized calls. Each male leopard seal produces these individual calls, and can arrange their few call types into individually distinctive sequences (or songs). The acoustic behavior of the leopard seal is believed to be linked to their breeding behaviour. In male seals, vocalizing coincides with the timing of their breeding season, which falls between November and the first week of January; captive female seals vocalize when they have elevated reproductive hormones. Conversely, a female leopard seal can attribute calls to their environment as well; however, usually it is to gain the attention of a pup, after getting back from a forage for food. 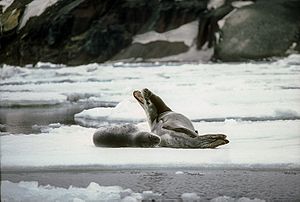 A mother leopard seal with her pup.

Since leopard seals live in an area that's difficult for humans to survive in, there isn't much known on their reproduction and breeding habits. In preparation for the pups; the females dig a circular hole in the ice as a home for the pup. A newborn pup weighs around 66 pounds and are usually with their mother for a month, before they are weaned off. The male leopard seal does not participate in the care taking of the pup, and goes back to its solitary lifestyle after the breeding season. Most leopard seal breeding is done on pack ice.

Five research voyages were made to Antarctica in 1985, 1987 and 1997–1999 to look at leopard seals. They sighted seal pups from the beginning of November to the end of December, and noticed that there was about one pup for every three adults, and they also noticed that most of the adults were staying away from other adults during this season, and when they were seen in groups they weren't showing any signs of interaction.

Vocalization is thought to play an important role in breeding, since males are much more vocal around the time of breeding. Mating takes place in the water, and then the male leaves the female to care for the pup. The average gestation period is 274 days, then after giving birth to a single pup (weighing about 66 pounds), the pup usually stays with the mother and nurses for a month before it is weaned off.

Research shows that on average, the aerobic dive limit for juvenile seals is around 7 minutes, which means that juvenile leopard seals don't eat krill during the winter months, which is a major part of older seals diets, since krill is found at deeper depths during this time. This might occasionally lead to co-operative hunting. Co-operative hunting of leopard seals on Antarctic fur seal pups has been witnessed, which could be a mother helping her older pup, or could also be female-male couple interactions, in order to increase their hunting productivity.

The leopard seal is bold, powerful and curious. In the water, there is a fine line between curiosity and predatory behaviour, and it may 'play' with penguins it does not intend to eat. There are also records of leopard seals attacking divers. Paul Nicklen, a National Geographic magazine photographer, captured pictures of a leopard seal bringing live, injured, and then dead penguins to him, possibly in an attempt to teach the photographer how to hunt. 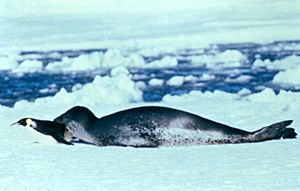 Around the sub-Antarctic island of South Georgia, the Antarctic fur seal (Arctocephalus gazella) is the main prey. Other prey include penguins and fish. Antarctic krill (Euphausia superba), southern elephant seal (Mirounga leonina) pups and seabirds other than penguins have also been taken as prey.

When hunting penguins, the leopard seal patrols the waters near the edges of the ice, almost completely submerged, waiting for the birds to enter the ocean. It kills the swimming bird by grabbing the feet, then shaking the penguin vigorously and beating its body against the surface of the water repeatedly until the penguin is dead. Previous reports stating the leopard seal skins its prey before feeding have been found to be incorrect. Lacking the teeth necessary to slice its prey into manageable pieces, it flails its prey from side to side tearing and ripping it into smaller pieces.

All content from Kiddle encyclopedia articles (including the article images and facts) can be freely used under Attribution-ShareAlike license, unless stated otherwise. Cite this article:
Leopard seal Facts for Kids. Kiddle Encyclopedia.