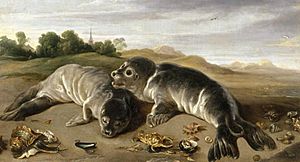 The earless seals, phocids or true seals are one of the three main groups of mammals within the seal lineage, Pinnipedia. All true seals are members of the family Phocidae. They are sometimes called crawling seals to distinguish them from the fur seals and sea lions of the family Otariidae. Seals live in the oceans of both hemispheres and, with the exception of the more tropical monk seals, are mostly confined to polar, subpolar, and temperate climates. The Baikal seal is the only species of exclusively freshwater seal.

The earliest known fossil earless seal is Noriphoca gaudini from the late Oligocene or earliest Miocene (Aquitanian) of Italy. Other early fossil phocids date from the mid-Miocene, 15 million years ago in the north Atlantic. Until recently, many researchers believed that phocids evolved separately from otariids and odobenids; and that they evolved from otter-like animals, such as Potamotherium, which inhabited European freshwater lakes. Recent evidence strongly suggests a monophyletic origin for all pinnipeds from a single ancestor, possibly Enaliarctos, most closely related to the mustelids and bears.

Monk seals and elephant seals were previously believed to have first entered the Pacific through the open straits between North and South America, with the Antarctic true seals either using the same route or travelled down the west coast of Africa. It is now thought that the monk seals, elephant seals, and Antarctic seals all evolved in the southern hemisphere, and likely dispersed to their current distributions from more southern latitudes.

All content from Kiddle encyclopedia articles (including the article images and facts) can be freely used under Attribution-ShareAlike license, unless stated otherwise. Cite this article:
Earless seal Facts for Kids. Kiddle Encyclopedia.