The Caribbean monk seal (Neomonachus tropicalis), also known as the West Indian seal or sea wolf, was a species of seal native to the Saint Kitts and Nevis, and is now believed to be extinct. The main predators of Caribbean monk seals were sharks and humans. Overhunting of the seals for oil, and overfishing of their food sources, are the established reasons for the seals' extinction. The last confirmed sighting of the Caribbean monk seal was in 1952 at Serranilla Bank, between Jamaica and Nicaragua. In 2008, the species was officially declared extinct by the United States, after an exhaustive search for the seals that lasted for about five years. This analysis was conducted by the National Oceanic and Atmospheric Administration and the National Marine Fisheries Service. Caribbean monk seals were closely related to Hawaiian monk seals, which live around the Hawaiian Islands and are now endangered, and Mediterranean monk seals, another endangered species. 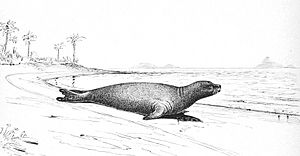 Caribbean monk seals had a relatively large, long, robust body, could grow to nearly 2.4 metres (8 ft) in length and weighed 170 to 270 kilograms (375 to 600 lb). Males were probably slightly larger than females, which is similar to Mediterranean monk seals. Like other monk seals, this species had a distinctive head and face. The head was rounded with an extended broad muzzle. The face had relatively large wide-spaced eyes, upward opening nostrils, and fairly big whisker pads with long light-colored and smooth whiskers. When compared to the body, the animal's foreflippers were relatively short with little claws and the hindflippers were slender. Their coloration was brownish and/or grayish, with the underside lighter than the dorsal area. Adults were darker than the more paler and yellowish younger seals. Caribbean monk seals were also known to have algae growing on their pelage, giving them a slightly greenish appearance, which is similar to Hawaiian monk seals.

Historical records suggest that this species may have "hauled out" at resting areas on land in large social groups, typically 20-40 animals, but sometimes up to 100 individuals, throughout its range. The groups may have been organised based on age and life stage differences. Their diet most likely consisted of fish and crustaceans.

Like other true seals, the Caribbean monk seal was sluggish on land. Its lack of fear of humans, and an unaggressive, curious nature was taken advantage of by human hunters. 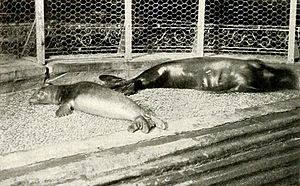 Caribbean monk seals had a long pupping season, which is typical for pinnipeds living in subtropical and tropical habitats. In Mexico, breeding season peaked in early December. Like other monk seals, this species had four retractable nipples for suckling their young. Newborn pups were probably about 1 metre (3 ft 3 in) in length and weighed 16 to 18 kilograms (35 to 40 lb) and reportedly had a sleek, black lanugo coat when born. It is believed this animal's average lifespan was approximately twenty years.

The Caribbean monk seal nasal mite (Halarachne americana), was entirely dependent on the seal, living inside of its nasal cavity, and went extinct with it.

Caribbean monk seals were found in warm temperate, subtropical and tropical waters of the Caribbean Sea, Gulf of Mexico, and the western Atlantic Ocean. They probably preferred to haul out at low sandy beaches above high tide on isolated and secluded atolls and islands, but occasionally would visit the mainland coasts and deeper waters offshore. This species may have fed in shallow lagoons and reefs.

Depiction by Henry W. Elliott from 1884

The first historical mention of the Caribbean monk seal is recorded in the account of the second voyage of Christopher Columbus. In August 1494 a ship laid anchor off the mostly barren island of Alta Velo, south of Hispaniola, the party of men went and killed eight seals that were resting on the beach. The second recorded interaction with Caribbean monk seals was Juan Ponce de León’s discovery of the Dry Tortugas Islands. On June 21, 1513 Ponce de León discovered the islands, he ordered a foraging party to go ashore, where the men killed fourteen of the docile seals. There are several more records throughout the colonial period of seals being discovered and hunted at Guadelupe, the Alacrane Islands, the Bahamas, the Pedro Cays, and Cuba. As early as 1688 sugar plantation owners sent out hunting parties to kill hundreds of seals every night in order to obtain oil to lubricate the plantation machinery. A 1707 account describes fisherman slaughtering seals by the hundreds for oil to fuel their lamps. By 1850 so many seals had been killed that there were no longer sufficient numbers for them to be commercially hunted.

In the late nineteenth and early twentieth centuries, scientific expeditions to the Caribbean encountered the Caribbean monk seal. In December 1886 the first recorded scientific expedition to research seals, led by H. A. Ward and Professor F. Ferrari Perez as part of the Mexican Geographical and Exploring Survey, ventured to a small collection of reefs and a small cay known as the Triangles (20.95° N 92.23° W) in search of monk seals. Although the research expedition was in the area for only four days, forty-two specimens were killed and taken away; the two leaders of the expedition shared them. Two specimens from this encounter survive intact at the British Museum of Natural History and the Cambridge Zoological Museum respectively. The expedition also captured a newly born seal pup that died in captivity a week later.

The first Caribbean monk seal to live in captivity for an extended period was a female seal that lived in The New York Aquarium. The seal was captured in 1897 and died in 1903, living in captivity for a total of five and a half years. In 1909 The New York Aquarium acquired four Caribbean monk seals, three of which were yearlings (between one and two years old), and the other a mature male.

Through the first half of the twentieth century, Caribbean monk seal sightings became much rarer. In 1908, a small group of seals was seen at the once bustling Tortugas Islands. Fishermen captured six seals in 1915, which were sent to Pensacola, Florida and eventually released. A seal was killed near Key West, Florida in March 1922. There were sightings of Caribbean monk seals on the Texas coast in 1926 and 1932. The last seal recorded to be killed by humans was killed on the Pedro Cays in 1939. Two more seals were seen on Drunken Mans Cay, just south of Kingston, Jamaica, in November 1949. In 1952 the Caribbean monk seal was confirmed sighted for the last time at Serranilla Bank, between Jamaica and Nicaragua.

Unconfirmed sightings of Caribbean monk seals by local fishermen and divers are relatively common in Haiti and Jamaica, but two recent scientific expeditions failed to find any sign of this animal. It is possible the mammal still exists, but some biologists strongly believe the sightings are of wandering hooded seals, which have been positively identified on archipelagos such as Puerto Rico and the Virgin Islands.

All content from Kiddle encyclopedia articles (including the article images and facts) can be freely used under Attribution-ShareAlike license, unless stated otherwise. Cite this article:
Caribbean monk seal Facts for Kids. Kiddle Encyclopedia.