The capital city is Basseterre. It is on the main island of St Kitts, also called Saint Christopher. The island of Nevis has some rights of self-government and two seats in the federal parliament.

St Kitts and Nevis is about one-third of the way from Puerto Rico to Trinidad and Tobago.

The headquarters of the Eastern Caribbean Central Bank is in St Kitts. That bank controls the East Caribbean dollar.

The Islands, plus Anguilla, got limited self-government in 1967. Anguilla objected and the Metropolitan Police were sent there in 1968 to stop rioting. Until 19 December 1980 the official name of St Kitts and Nevis was Saint Christopher, Nevis and Anguilla.

In 1970, a movement to make Nevis separate from St Kitts started.

In 1983, the constitution set up a 15-member National Assembly. The Assembly is unicameral, that is, it only has one chamber. 3 members of the Assembly are appointed by the Governor General, on the advice of the Prime Minister and the Leader of the Opposition. The other members are elected. If the Speaker decides to stand for re-election he is automatically elected, without a contest.

Nevis is responsible for its own internal affairs. There is an eight-member Nevis Island Assembly, and an Island administration headed by the premier. 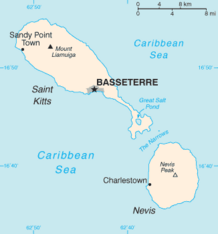 Map of Saint Kitts and Nevis 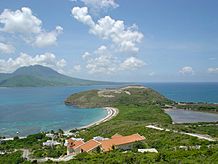 View of Nevis from St. Kitts

The country has two main islands, Saint Kitts and Nevis. The highest peak, at 1,156 metres, is Mount Liamuiga. There is also a smaller island named Booby Island. No one lives on Booby Island.

The islands are of volcanic origin. There are large central peaks covered in tropical rainforest. People do not live on the steeper slopes leading to these peaks. Most of the people on both islands live closer to the sea. There are many rivers coming from the mountains of both islands. These give fresh water to the people. St. Kitts also has one small lake.

These are some of the more important cities and towns in Saint Kitts and Nevis.

The St. Kitts and Nevis national football team, also known as the "Sugar Boyz", has had some international success. They went to the semifinal round of qualification for the 2006 FIFA World Cup in the CONCACAF region. Led by Glence Glasgow they defeated U.S. Virgin Islands and Barbados. They then lost to Mexico, Saint Vincent and the Grenadines, and Trinidad and Tobago.

The St. Kitts and Nevis Billiard Federation, SKNBF, is the governing body for cue sports across the two islands.

Kim Collins is the country's best known track and field athlete. He has won gold medals in the 100 metres at both the World Championships in Athletics and Commonwealth Games. At the 2000 Sydney Olympics he was the country's first athlete to reach an Olympic final. He and three other athletes represented St. Kitts and Nevis at the 2008 Summer Olympics. The four by one hundred metre relay team won a bronze medal in the 2011 world championships.

American writer and former figure skater and triathlete Kathryn Bertine was given dual citizenship. She tried to qualify for the 2008 Summer Olympics representing St. Kitts and Nevis in women's cycling. She did not make enough points to go the Olympics.

All content from Kiddle encyclopedia articles (including the article images and facts) can be freely used under Attribution-ShareAlike license, unless stated otherwise. Cite this article:
Saint Kitts and Nevis Facts for Kids. Kiddle Encyclopedia.