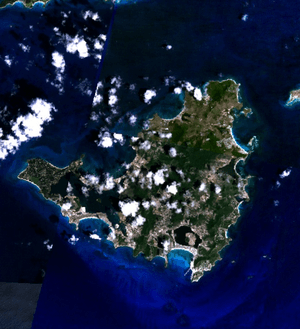 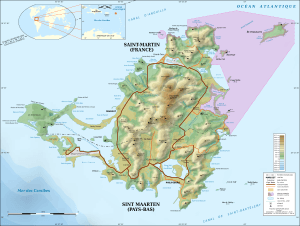 Saint Martin is a tropical island in the northeast Caribbean, approximately 300 km southeast of Puerto Rico. The 87 km² island is divided roughly in half between France and the Netherlands; it is the smallest inhabited sea island divided between two nations.

The main towns are Marigot (on the French part) and Philipsburg in the Dutch one. About 60.000 people live on the island.

All content from Kiddle encyclopedia articles (including the article images and facts) can be freely used under Attribution-ShareAlike license, unless stated otherwise. Cite this article:
Saint Martin Facts for Kids. Kiddle Encyclopedia.