Sint Maarten is a constituent country of the Kingdom of the Netherlands in the Caribbean. With a population of 40,120 on an area of 37 km2 (14 sq mi), it encompasses the southern 40% of the divided island of Saint Martin, while the northern 60% of the island constitutes the French overseas collectivity of Saint-Martin, the only place that France borders the Netherlands. Sint Maarten's capital is Philipsburg.

Before 10 October 2010, Sint Maarten was known as the Island Territory of Sint Maarten (Dutch: Eilandgebied Sint Maarten), and was one of five island territories (eilandgebieden) that constituted the Netherlands Antilles.

On 6 and 7 September 2017, the island was hit by Category 5+ Hurricane Irma, which caused widespread and significant damage to buildings and infrastructure.

As of 2018, Sint Maarten has the 14th largest GDP per capita in the world (including territories) when measured by purchasing power parity, over three times as high as its French counterpart.

The island was named by Christopher Columbus in honour of St Martin of Tours, as he first sighted it on the saint's feast day on 11 November 1493.

Sint Maarten had been inhabited by Amerindian peoples for many centuries, with archaeological finds pointing to a human presence on the island as early as 2000 BC. These people most likely migrated from South America. The earliest identified group were the Arawak people who are thought to have settled around the period 800 BC - 300 BC. Circa 1300-1400 AD they began to be displaced with the arrival of the more bellicose Carib peoples. 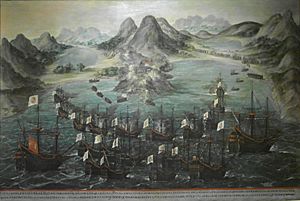 The 1633 Spanish capture of Saint Martin, as painted by Juan de la Corte

Christopher Columbus was the first European to see St Martin, on 11 November 1493 during his second voyage to the Americas. Nominally now Spanish territory, the island became the focus of the competing interest of the European powers, notably France, Britain and the Netherlands. While the French wanted to colonize the islands between Trinidad and Bermuda, the Dutch found San Martín a convenient halfway point between their colonies in New Amsterdam (present day New York) and New Holland. Meanwhile, the Amerindian population began to decline precipitously, dying from introduced diseases to which they had no immunity.

The Dutch built a fort (Fort Amsterdam) on the island in 1631; Jan Claeszen Van Campen became its first governor and the Dutch West India Company began mining salt on the island. Tensions between the Netherlands and Spain were already high due to the ongoing Eighty Years' War, and in 1633 the Spanish captured St Martin and drove off the Dutch colonists. At Point Blanche, they built what is now Old Spanish Fort to secure the territory. The Dutch under Peter Stuyvesant attempted to wrest back control in 1644, but were repulsed. However in 1648 the Eighty Years War ended and the Spanish, no longer seeing any strategic or economic value in the island, simply abandoned it.

With St. Martin free again, both the Dutch and the French jumped at the chance to re-establish their settlements. Dutch colonists came from St. Eustatius, while the French came from St. Kitts. After some initial conflict, both sides realized that neither would yield easily. Preferring to avoid an all-out war, they signed the Treaty of Concordia in 1648, which divided the island in two. During the treaty's negotiation, the French had a fleet of naval ships off shore, which they used as a threat to bargain more land for themselves. In spite of the treaty, relations between the two sides were not always cordial. Between 1648 and 1816, conflicts changed the border sixteen times. The entire island came under effective French control from 1795 when Netherlands became a puppet state under the French Empire until 1815. In the end, the French came out ahead with 53 km2 (20 sq mi; 61%) against 34 km2 (13 sq mi; 39%) on the Dutch side.

To work the new cotton, tobacco and sugar plantations the French and Dutch began importing large numbers of African slaves, who soon came to outnumber the Europeans. The slave population quickly grew larger than that of the land owners. Subjected to cruel treatment, slaves staged rebellions, and their overwhelming numbers made it impossible to ignore their concerns. In 1848, the French abolished slavery in their colonies including the French side of St. Martin. Slaves on the Dutch side of the island protested and threatened to flee to the French side to seek asylum. The local Dutch authorities then freed the colonies' slaves. While this decree was respected locally, it was not until 1863 when the Dutch abolished slavery in all of their island colonies that the slaves became legally free. 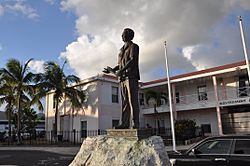 Statue of Claude Wathey in Philipsburg

After the abolition of slavery, plantation culture declined and the island's economy suffered. In 1939 Sint Maarten received a major boost when it was declared a duty-free port. In 1941 the island was shelled by a German U-boat during World War II.

Tourism began growing from the 1950s onward, and Princess Juliana International Airport became one of the busiest in the Eastern Caribbean. For much of this period, Sint Maarten was governed by business tycoon Claude Wathey of the Democratic Party. The island's demographics changed dramatically during this period as well, with the population increasing from a mere 5,000 people to around 60,000 people by the mid-1990s. Immigration from the neighbouring Lesser Antilles, Curaçao, Haiti, the Dominican Republic, the United States, Europe, and Asia turned the native population into a minority.

Hurricane Luis hit the island in 1995, causing immense destruction and resulting in 12 deaths.

In 1994 the Kingdom of the Netherlands and France had signed the Franco-Dutch treaty on Saint Martin border controls, which allows for joint Franco-Dutch border controls on so-called "risk flights". After some delay, the treaty was ratified in November 2006 in the Netherlands, and subsequently entered into force on 1 August 2007. Though the treaty is now in force, its provisions are not yet implemented as the working group specified in the treaty is not yet installed.

Sint Maarten has been assigned the ISO 3166-1 alpha-2 country codes of SXM and SX, and the .sx Internet ccTLD became available to register on 15 November 2012. 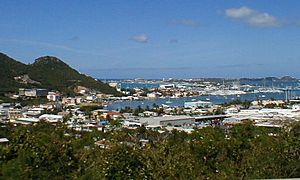 The port in Sint Maarten after Hurricane Irma 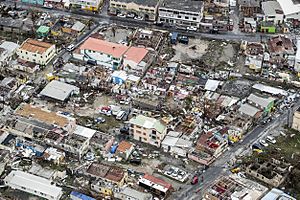 Damaged buildings in the wake of Hurricane Irma 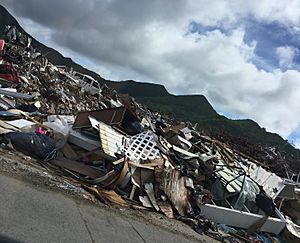 Hurricane Irma made landfall on 6 September 2017, causing extensive damage. 4 deaths and 34 injuries, of which 11 seriously, were reported. Princess Juliana Airport was extensively damaged but reopened on a partial basis in two days to allow incoming relief flights and for flights that would take evacuees to other islands. By 8 September, "many inhabitants [were] devoid of basic necessities" and looting had become a serious problem. Reports on 9 September indicated that 70% of the infrastructure on the Dutch part had been destroyed. A survey by the Dutch Red Cross estimated that nearly a third of the buildings in Sint Maarten had been destroyed and that over 90 percent of structures on the island had been damaged.

The government of the Netherlands was sending aid, as well as additional police and military, since looting was a serious problem. A statement by the Prime Minister summarized the situation on 8 September. "We've lost many, many homes. Schools have been destroyed. We foresee a loss of the tourist season because of the damage that was done to hotel properties, the negative publicity that one would have that it's better to go somewhere else because it's destroyed. So that will have a serious impact on our economy." At the time, preparations were being made as Hurricane Jose approached the island. Government estimates on 9 September indicated that 70 percent of houses were badly damaged or destroyed; much of the population was living in shelters pending the arrival of Jose. Thankfully, this second hurricane did not have a significant impact on the island.

Widespread looting had started and a state of emergency was announced; some 230 soldiers from the Netherlands were patrolling. Additional Dutch troops were expected. By 10 September, some 1,200 Americans had been evacuated to Puerto Rico from Sint Maarten by military aircraft during a time of looting and violence. On that date, Royal Caribbean International said that the company was sending its Adventure of the Seas to Saint-Martin and to St. Thomas to provide supplies and to offer evacuation services. The ship arrived on the island on 10 September with water, ice, garbage bags, clothing and canned food, and evacuated 320 people. By 11 September, King Willem-Alexander had already arrived in Curaçao and was scheduled to visit St. Maarten, St. Eustatius and Saba. When King Willem-Alexander visited Sint Maarten for the first time post-hurricane, he was shocked by the destruction. He immediately called for support from the European Union so the island could recover swiftly. Later in the month, it was revealed that the EU would allocate €2 billion in emergency funds for immediate disaster relief to restore basic essentials on Sint Maarten, such as drinking water and sanitation. In addition to the EU's contribution, Red Cross, the government of the Netherlands, and Dutch citizens of the mainland pitched in (via donations and crowdfunding) to raise money for the devastated island.

A report in late March 2018 indicated that the airport was able to handle some flights and some service had resumed from the US, Canada, and Europe. A new departure lounge was being used during rebuilding of the original facility. The General Aviation building was being used for passengers arriving on the island.

A little over a year after Hurricane Irma, St Maarten’s cruise industry had recovered to the extent that in 2018, more than 1 million cruise passengers visited the island.

Telecommunications, including Wi-Fi had been restored on the island, 95% of customers were receiving electricity and drinking water was readily available on the island. Some tourist accommodations were open, with 27 operating and 36 said to be ready some time later this year. Cruise ships were arriving; a full 14 were accommodated the week of February 18, 2018. 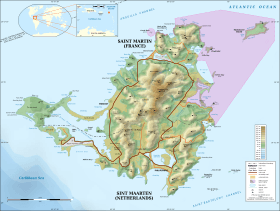 Sint Maarten occupies the southern half of the island of Saint Martin in the Leeward Islands; the northern half forms the French territory of Saint Martin. To the north across the Anguilla Channel lies the British Oversea Territory of Anguilla, to the south-east of the island lies the French island of Saint Barthélemy and further south are the Dutch islands of Saba and Saint Eustatius.

Sint Maarten is 34 sq km. The terrain is generally hilly, with the highest peak being Mount Flagstaff at 383m. The area to west around the airport is flatter, and contains the Dutch section of the Simpson Bay Lagoon. The Great Salt Pond lies to north of Philipsburg. Several small islands lie of the coast, notably Cow and Calf, Hen and Chicks, Molly Beday, Pelikan Key, Guana Key of Pelican and Sint Maarten which lies in the Simpson Bay Lagoon.

All content from Kiddle encyclopedia articles (including the article images and facts) can be freely used under Attribution-ShareAlike license, unless stated otherwise. Cite this article:
Sint Maarten Facts for Kids. Kiddle Encyclopedia.