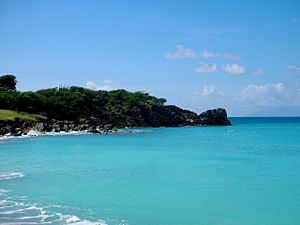 Antigua (IPA: /ænˈtiːgə//an-tee-gah) is an island in the West Indies, Leeward Islands in the Caribbean region, the main island of the country of Antigua and Barbuda. It is also known as Wadadli, which means approximately "our own". The island's circumference is about 87 kilometres (54 miles) and it has an area of 281 km² (108 square miles). It has a population of about 69,000 people as of July 2006. It is the largest of the Leeward Islands, and the most developed and prosperous due to its upscale tourism industry, internet gambling services and education services, including two medical schools.

Christopher Columbus was the first European to visit Antigua. Before he visited, there were other people living there like the Ciboney, Arawak and Carib Indian tribes. Columbus visited Antigua in the year 1632. He named it after Mary, the mother of Jesus. The British visited in 1632 and lived there. They brought slaves with them. The slaves farmed sugar cane. The slaves were allowed to stop being slaves in 1834.

The island stopped being a part of Britain in 1981. It is now a country with Barbuda.

All content from Kiddle encyclopedia articles (including the article images and facts) can be freely used under Attribution-ShareAlike license, unless stated otherwise. Cite this article:
Antigua Facts for Kids. Kiddle Encyclopedia.