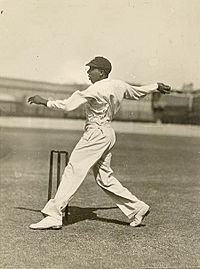 Learie Constantine was one of the first great West Indian players. He played Test cricket in the 1920s and 1930s. He later became active in politics, was the first High Commissioner from Trinidad and Tobago to the UK, and entered the House of Lords as Baron Constantine of Maraval and Nelson.

From the mid 1970s to the early 1990s, the West Indies team was one of the strongest in the world in both Test and One Day International cricket. A number of cricketers among the best in the world have played for the West Indies. Sir Garfield Sobers, Lance Gibbs, Gordon Greenidge, George Headley, Clive Lloyd, Malcolm Marshall, Andy Roberts, Alvin Kallicharran, Rohan Kanhai, Frank Worrell, Everton Weekes, Curtly Ambrose, Michael Holding, Joel Garner and Sir Viv Richards are in the ICC Hall of Fame. World-record holder Brian Lara was a West Indies Test player.

All content from Kiddle encyclopedia articles (including the article images and facts) can be freely used under Attribution-ShareAlike license, unless stated otherwise. Cite this article:
West Indies cricket team Facts for Kids. Kiddle Encyclopedia.