Andre Dwayne Russell (born 29 April 1988) is a Jamaican professional cricketer who plays internationally for the West Indies and for Jamaica in West Indian domestic cricket as an all-rounder. He has played in more than 300 Twenty20 matches for a range of sides in leagues throughout the world. He is widely regarded as one of the greatest T20 cricketers of all time. Russell scored a century in a record 40 balls in the 2018 Caribbean Premier League and took a hat-trick in the same match, becoming the second player to take a hat-trick and score a century in the same Twenty20 match.

On 21 September 2013, in a match against India A, Russell became the first bowler in T20 cricket to take four wickets in successive deliveries.

A fast bowling all-rounder, Russell made his Test cricket debut against Sri Lanka in November 2010. This is the only Test match of his career.

He made his One Day International (ODI) debut in the 2011 Cricket World Cup match against Ireland at Mohali. After a poor home series against Pakistan, he made his mark against in the ODI series against India. After being dropped from the first two ODIs, he scored 92 not out off 64 balls in the 3rd ODI after coming to the crease at 96/7. In the 5th ODI at Sabina Park in Kingston, he was named the Player of the Match as he took 4/35 (from 8.3 overs) to dismiss India for 251 in 47.1 overs.

He was named in the 'Team of the Tournament' for the 2016 T20 World Cup by the ICC, Cricinfo and Cricbuzz.

In April 2019, he was named in the West Indies' squad for the 2019 Cricket World Cup. In the West Indies match against Australia, Russell became the quickest batsman, in terms of balls faced, to score 1,000 run in ODIs, facing only 767 deliveries. However, on 24 June 2019, Russell was ruled out of the rest of the tournament, due to a knee injury, and was replaced by Sunil Ambris.

On 9 July 2021, during the first T20I against Australia, Russell scored his maiden T20I half-century. He scored 51 off 28 balls and helped West Indies post 145 before being dismissed by Josh Hazlewood.

Russell has played in over 300 T20 matches and appeared for teams in a number of franchise leagues. He was also named in the T20 XI of the years 2016 and 2018 by Cricinfo. 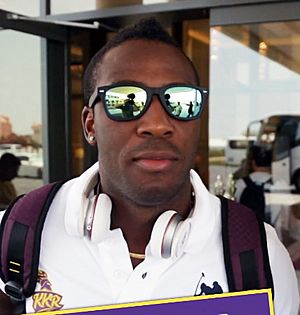 During the 2012 Indian Premier League Players Auction, he was bought by the Delhi Daredevils for a sum of $450,000. Ahead of the 2014 season he was bought by Kolkata Knight Riders and has been seen as a key batsman for the team in the later overs of matches. For his performances in 2015, he was named in the Cricinfo IPL XI for the season. He was on course to win the IPL Super Striker award in 2018, awarded for having the highest strike rate in the tournament, before being pipped by his teammate Sunil Narine. He eventually won it next year in the 2019 IPL, where he had a record IPL season strike rate of over 205, and was also announced as the Player of the Tournament. In an otherwise unsuccessful season, he emerged as both the highest run scorer and the highest wicket taker for his team, while also being the third highest run scorer in the tournament. He hit 52 sixes in the tournament; only Chris Gayle has hit more sixes in any single season of the IPL. For his performances in the 2019 IPL season, he was named in the Cricinfo IPL XI.

On 16 August 2016 Russell scored the fastest Caribbean Premier League century, completing his 100 in 42 balls. He broke his own CPL record in 2018 with a century in 40 balls.

In May 2018, he was named as one of the ten marquee players for the first edition of the Global T20 Canada cricket tournament. He was selected to play for the Vancouver Knights.

In September 2018, he was named as the Icon Player for Nangarhar's squad in the first edition of the Afghanistan Premier League tournament. The following month, he was named in the squad for the Dhaka Dynamites in the 2018–19 Bangladesh Premier League. In June 2019, he was selected to play for the Vancouver Knights franchise team in the 2019 Global T20 Canada tournament.

Andre Russell was picked by Southern Brave for The Hundred Cricket 2021 edition.[1]

In 2014, Russell began a second career as a recording artist under the name 'Dre Russ', with two singles released in November, one a collaboration with Beenie Man.

All content from Kiddle encyclopedia articles (including the article images and facts) can be freely used under Attribution-ShareAlike license, unless stated otherwise. Cite this article:
Andre Russell Facts for Kids. Kiddle Encyclopedia.