Kingston is the capital and largest city of Jamaica, located on the southeastern coast of the island. It faces a natural harbour protected by the Palisadoes, a long sand spit which connects the town of Port Royal and the Norman Manley International Airport to the rest of the island. In the Americas, Kingston is the largest predominantly English-speaking city south of the United States. 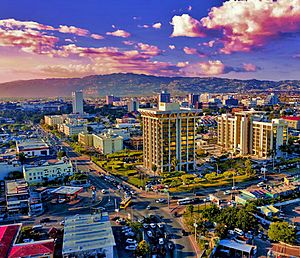 A View Of The Skyline In Kingston, Jamaica

Kingston was founded in July 1692 as a place for survivors of the 1692 earthquake that destroyed Port Royal. Before the earthquake, Kingston's functions were purely agricultural. The earthquake survivors set up a camp on the sea front. Approximately two thousand people died due to mosquito-borne diseases. Initially the people lived in a tented camp on Colonel Barry's Hog Crawle. The town did not begin to grow until after the further destruction of Port Royal by fire in 1703.

By the end of the 18th century, the city contained more than 3,000 brick buildings. The harbour drew trade, and played part in several naval wars of the 18th century. Kingston took over the functions of Spanish Town. These functions included agriculture, commercial, processing and a main transport hub to and from Kingston and other sections of the island. 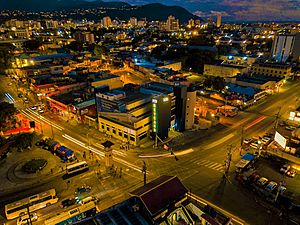 The government passed an act to transfer the government offices to Kingston from Spanish Town, which occurred in 1872. It kept this status when the island was granted independence in 1962.

In 1907, 800 people died in another earthquake known as the 1907 Kingston earthquake, destroying nearly all the historical buildings south of Parade in the city. During the 1930s, island-wide riots led to the development of trade unions and political parties to represent workers.

The city became home to the Mona campus of the University of the West Indies founded in 1948, with 24 medical students. 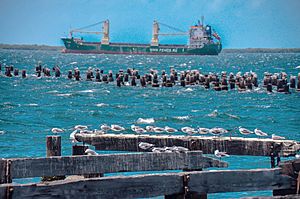 Not until the 1960s did major change occur in the development of Kingston's city centre. The international attention of reggae music at that time coincided with the expansion and development of 95 acres (38 ha) of the Kingston city centre waterfront area. These developments led to an influx of shops and offices.

In 1966 Kingston was the host city to the Commonwealth Games.

The western section of the city was not the focus of development, and that area proved to be politically tense. The 1970s saw deteriorating economic conditions that led to recurrent violence and a decline in tourism which later affected the island.

Kingston has made efforts to modernise and develop its city structure and functions. Various organisations such as the Kingston Restoration Company, the Urban Development Corporation (UDC), the Port Authority of Jamaica and the Port Royal Development Company, among others have sought to develop the urban structure of the city. 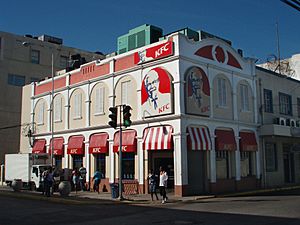 Kingston plays a central role in Jamaica's economy. The vast majority of economic activity takes place within Kingston, and as most government ministries are located in the city, it is a key force in legislation in regards to Jamaica's finances. The high population density of the capital city means that the majority of monetary transactions occur in Kingston - stimulating much of Jamaica's local economy. The city is also home to the highest number of schools, hospitals and universities anywhere in Jamaica. Kingston is also the island's main transportation hub and its largest seaport.

The city's major industries include tourism, apparel manufacturing, and shipping. Many international exports are traded through the city's seaport, with major exports including bauxite, sugar and coffee. The city is also a major tourist destination, and tourism is one of its largest sources of economic activity. 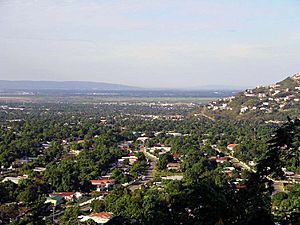 In 1848 the Jamaican government expanded Kingston by constructing new homes in the west, north and east of the city. This housing became highly segregated in terms of race and class and by 1860 the majority of white elites lived on the outskirts of the city.

As Kingston's population grew, existing settlements became so densely occupied that marshes in the southwest were filled in to allow the development of new housing. By 1935, continued population growth and poverty resulted in the emergence of slums in the east and west of the city. Later these areas were demolished by the government and residents were rehoused in Denham Town. 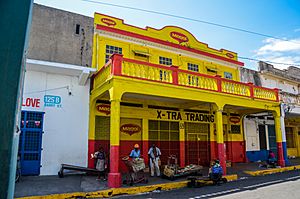 Suburbanization also became significant and by the 1960s this residential area spread to the foothills of the Blue Mountains. Subsequently, the lack of space and continued consumerism meant this area then expanded to the east of the mountains.

In Kingston, 20% of the population now live in squatter settlements. In contrast Kingston is also home to Norbrook, a suburb that holds some of the most expensive houses in all of Jamaica. 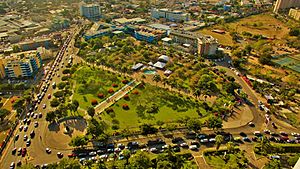 The Emancipation Park In Kingston, Jamaica

The city of Kingston is home to a number of urban parks which are frequently transformed to accommodate various events and festivities on the Jamaican calendar.

The Liguanea Club, a recreational and social club for the upper class in society, located on Knutsford Boulevard, owned over 35 acres (14 ha) of land including the former Liguanea Park now the site of Emancipation Park. The club gave the land measuring seven acres as a gift to the Jamaican Government. 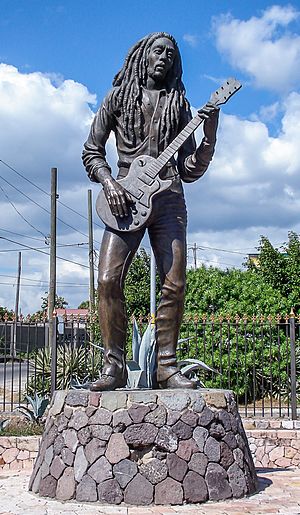 The Royal Botanical Gardens at Hope, popularly called Hope Gardens serves as a national attraction. The Hope Gardens is a part of the 2,000 acres (809 ha) of land making it the largest botanical garden in the English-speaking Caribbean. The formal Botanical Gardens were laid out on approximately 60 acres (24 ha) with the assistance of personnel from the Kew Gardens in England.

In the 1950s, the Queen, after visiting the island and being pleased with the state of the gardens, gave permission for it to be called the Royal Botanical Gardens, Hope. The Gardens have many exotic species. Over the years, the ravages of hurricanes and other disasters have resulted in the loss of a significant number of species. However, there are still some prominent trees and popular sites to be viewed in the Gardens.

At Hope Gardens, visitors can view a number of other features including the Coconut Museum, the Sunken Gardens, the Orchid House, the Lily Pond, the Maze and Palm Avenue. The Hope Gardens has an adjoining zoo referred to as Hope Gardens Zoo.

Kingston, as the capital, is the financial, cultural, economic and industrial centre of Jamaica. Many financial institutions are based in Kingston, and the city boasts the largest number of hospitals, schools, universities and cultural attractions of any urban area on the island. Notable Kingston landmarks include the University of the West Indies, Jamaica Defence Force Museum, and Bob Marley Museum. A United Nations agency, the International Seabed Authority is headquartered in Kingston.

All content from Kiddle encyclopedia articles (including the article images and facts) can be freely used under Attribution-ShareAlike license, unless stated otherwise. Cite this article:
Kingston, Jamaica Facts for Kids. Kiddle Encyclopedia.