Warwickshire ( abbreviated Warks) is a county in the West Midlands region of England. The county town is Warwick, and the largest town is Nuneaton. The county is famous for being the birthplace of William Shakespeare at Stratford-upon-Avon and Victorian novelist George Eliot, (born Mary Ann Evans), at Nuneaton. Other significant towns include Rugby, Leamington Spa, Bedworth, Kenilworth and Atherstone. The county offers a mix of historic towns and large rural areas. It is a popular destination for international and domestic tourists to explore both medieval and more recent history.

The county is divided into five districts of North Warwickshire, Nuneaton and Bedworth, Rugby, Warwick and Stratford-on-Avon.

The majority of Warwickshire's population live in the north and centre of the county. The market towns of northern and eastern Warwickshire were industrialised in the 19th century, and include Atherstone, Bedworth, Nuneaton, and Rugby. Of these, Atherstone has retained most of its original character. Major industries included coal mining, textiles, engineering and cement production, but heavy industry is in decline, being replaced by distribution centres, light to medium industry and services. Of the northern and eastern towns, only Nuneaton and Rugby (as the birthplace of rugby football) are well-known outside of Warwickshire. The prosperous towns of central and western Warwickshire including Royal Leamington Spa, Warwick, Stratford-upon-Avon, Kenilworth, Alcester and Wellesbourne harbour light to medium industries, services and tourism as major employment sectors.

The north of the county, bordering Staffordshire and Leicestershire, is mildly undulating countryside and the northernmost village, No Man's Heath, is only 34 miles (55 km) south of the Peak District National Park's southernmost point.

Much of western Warwickshire, including that area now forming part of Coventry, Solihull and Birmingham, was covered by the ancient Forest of Arden (most of which was cut down to provide fuel for industrialisation). Thus the names of a number of places in the central-western part of Warwickshire end with the phrase "-in-Arden", such as Henley-in-Arden, Hampton-in-Arden and Tanworth-in-Arden. The remaining area, not part of the forest, was called the Felden – from fielden.

In 1986 the West Midlands County Council was abolished and Birmingham, Coventry, and Solihull became effective unitary authorities, however the West Midlands county name has not been altogether abolished, and still exists for ceremonial purposes, and so the town and two cities remain outside Warwickshire.

Some organisations, such as Warwickshire County Cricket Club, which is based in Edgbaston, in Birmingham, still observe the historic county boundaries.

Coventry is effectively in the centre of the Warwickshire area, and still has strong ties with the county. Coventry and Warwickshire are sometimes treated as a single area and share a single Chamber of Commerce and BBC Local Radio Station (BBC Coventry & Warwickshire).

Coventry has been a part of Warwickshire for only some of its history. In 1451 Coventry was separated from Warwickshire and made a county corporate in its own right, called the County of the City of Coventry. In 1842 the county of Coventry was abolished and Coventry was remerged with Warwickshire. In recent times, there have been calls to formally re-introduce Coventry into Warwickshire, although nothing has yet come of this. The county's population would increase by almost a third-of-a-million overnight should this occur, Coventry being the UK's 11th largest city.

The town of Tamworth was historically divided between Warwickshire and Staffordshire, but since 1888 has been fully in Staffordshire.

In 1931, Warwickshire gained the town of Shipston-on-Stour from Worcestershire and several villages, including Long Marston and Welford-on-Avon, from Gloucestershire.

The following towns and villages in Warwickshire have populations of over 5,000. 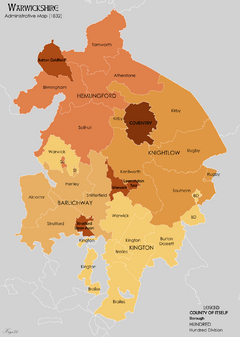 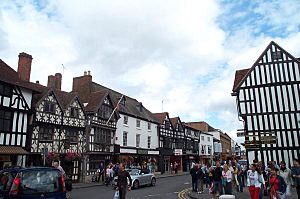 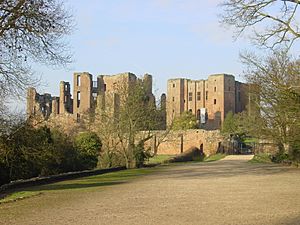 Warwickshire came into being as a division of the kingdom of Mercia in the early 11th century. The first reference to Warwickshire was in 1001, as Wæringscīr named after Warwick (meaning "dwellings by the weir").

During the Middle Ages Warwickshire was dominated by Coventry, which was at the time one of the most important cities in England due to its textiles trade in the heart of England. Warwickshire played a key part in the English Civil War, with the Battle of Edgehill and other skirmishes taking place in the county. During the Industrial Revolution Warwickshire became one of Britain's foremost industrial counties, with the large industrial cities of Birmingham and Coventry within its boundaries.

Several major motorways run through Warwickshire. These include:

Other major trunk routes in Warwickshire includes the A45 (Rugby-Coventry-Birmingham and east into Northamptonshire route). The A46 (connects the M40 to the M6 via Warwick, Kenilworth and Coventry), the A452 (Leamington to Birmingham route) and the A5 runs through Warwickshire passing Nuneaton between Tamworth and Hinckley. Also the A444 goes through Nuneaton and Bedworth. 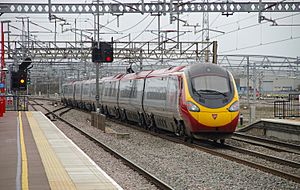 Other railway lines in Warwickshire include the Birmingham-Nuneaton section of the Birmingham to Peterborough Line, which continues east of Nuneaton towards Leicester and Peterborough. Nuneaton has direct services to Birmingham and Leicester on this line, and there are two intermediate stations at Water Orton and Coleshill in the extreme north-west of the county.

There is also a branch line from Birmingham to Stratford-upon-Avon. This line used to continue southwards to Cheltenham but is now a dead-end branch. There is an intermediate station on this line at Henley-in-Arden and at several small villages. Stratford also has direct rail services to London via the branch line to Warwick (mentioned earlier).

Until 2018 the only major town in Warwickshire without a station was Kenilworth. The Leamington to Coventry line passes through the town, but the station was closed in the 1960s as part of the Beeching cuts. A replacement station opened in April 2018, with an hourly service to Coventry and to Leamington provided by West Midlands Trains.

Coventry Airport is located in the Warwickshire village of Baginton. 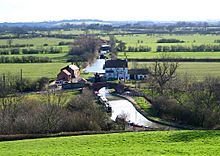 The Oxford Canal at Napton-on-the-Hill

Canals and navigable waterways in Warwickshire include:

In March 2014 the freedom of the county was bestowed on the Royal Regiment of Fusiliers, the honour was officially bestowed following a parade through Warwick on 6 June 2014.

Warwickshire is perhaps best known for being the birthplace of William Shakespeare from Stratford-upon-Avon. Even today, road signs at the county boundary describe Warwickshire as "Shakespeare's County". The county has also produced other famous figures such as Aleister Crowley (from Royal Leamington Spa), George Eliot (from Nuneaton), Rupert Brooke (from Rugby), and Michael Drayton (from Hartshill). The poet Philip Larkin lived in Warwick (born in nearby Coventry), and Elizabeth Gaskell went to school in Barford and Stratford. Folk musician Nick Drake, who record for Island records in the late 60s, early 70s, lived and died in Tanworth-in-Arden.

Warwickshire has a strong and growing economy with the automotive industry being a major contributor. In the north, BMW’s Hams Hall plant employs over 1,000 people, while Jaguar Land Rover and Aston Martin Lagonda have headquarters, including a giant advanced production creation centre, at Gaydon in the south.

Warwickshire is also establishing a growing reputation as a global hub of the video game industry. One of Britain's oldest still-running game studios, Codemasters, has operated out of Southam for decades; the greater "Silicon Spa" area, including Southam, Royal Leamington Spa and Warwick, is now home to dozens of game studios which employ a combined total of over 2,000 highly skilled people, equating to more than 10% of the UK's games development workforce.

Increasingly the region is establishing itself as one of the leading areas in battery technology with major developments announced in 2021 that include a £130 million UK Battery Industrialisation Centre (UKBIC) based in Coventry.

Tourism is also a key area of employment with country parks, rural areas and historic towns across the county. It generates a total business turnover of over £1 billion to the local economy and supports almost 20,000 jobs.

Warwickshire’s rural roads, canal towpaths and historic towns are increasingly popular with cycling enthusiasts. Its reputation as a major cycling destination has been bolstered in recent years having hosted a stage of the Women’s Tour since 2016 and the Men’s Tour of Britain in 2018 and 2019.

In 2022, St Nicholas Park in Warwick will host the Elite Men’s and Women’s Road Race as part of the Commonwealth Games taking place in Birmingham.

Warwickshire has no Football League clubs. As of the 2021–22 season the highest-placed team is Leamington, who play in the National League North, the sixth tier of English football. A level below in the Southern Football League Premier Division Central are Nuneaton Borough and Stratford Town. Other clubs include Rugby Town, Bedworth United, Southam United, Racing Club Warwick and Coleshill Town. All of these are affiliated to the Birmingham FA.

Warwickshire County Cricket Club play at Edgbaston Cricket Ground, Birmingham (historically part of Warwickshire). Notable English players for the side have been Eric Hollies, M.J.K. Smith, Bob Willis, Dennis Amiss, Jonathan Trott, Ian Bell, Moeen Ali and Chris Woakes. Overseas players have included Alvin Kallicharran, Rohan Kanhai, Brian Lara, Allan Donald and Shaun Pollock. In 2014 the club partly severed its links to the county by renaming its Twenty20 side the Birmingham Bears, much to the chagrin of many supporters.

Other grounds in modern-day Warwickshire which have hosted first-class cricket matches are:

The Dallas Burston Polo Club is a six-pitch polo club located near Southam.

Warwick Water Polo club play in the Midland League, and train in Warwick, Banbury and Coventry.

In the state sector, children start school in the school year in which they turn five. They stay at primary school for seven years (although this varies even within the county, as some people have previously gone for four years and then spent another four years at a 'middle school') until they are eleven. Warwickshire is one of 36 local authorities in England to still maintain the grammar school system in two districts: Stratford-on-Avon and Rugby. In the final year of primary school, children are given the opportunity of sitting the 11-plus exam to compete for a place at one of the 5 grammar schools: Stratford-upon-Avon Grammar School for Girls; King Edward VI School, a boys' school from year 7–11 with a mixed Sixth-Form; Lawrence Sheriff Grammar School for Boys; Rugby High School for Girls and Alcester Grammar School (mixed). The Warwickshire 11+ selection test consists of two papers, each containing a mixture of verbal reasoning, numerical reasoning and non-verbal reasoning multiple-choice questions.

A number of the Warwickshire grammar and independent schools have historical significance. King Edward VI School, Stratford-upon-Avon still uses 13th century school buildings and is the likely school of William Shakespeare, Rugby School was founded in 1567 and Warwick School was founded c. 914 AD, which makes it the oldest surviving boys' school in the country. Rugby School is one of nine schools that were defined as the "great" English public schools by the Public Schools Act 1868, and is a member of the Rugby Group. Rugby School, Princethorpe College and Warwick School are HMC schools, with the Headmaster from each school attending the Headmasters' and Headmistresses' Conference.

All content from Kiddle encyclopedia articles (including the article images and facts) can be freely used under Attribution-ShareAlike license, unless stated otherwise. Cite this article:
Warwickshire Facts for Kids. Kiddle Encyclopedia.