Aston is a ward of Central Birmingham, in the West Midlands of England. Commencing immediately to the north-east of the city centre, Aston constitutes a ward within the metropolitan authority. 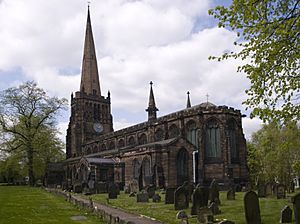 Aston was first mentioned in the Domesday Book in 1086 as "Estone", having a mill, a priest and therefore probably a church, woodland and ploughland. The Church of SS Peter & Paul, Aston was built in medieval times to replace an earlier church. The body of the church was rebuilt by J. A. Chatwin during the period 1879 to 1890; the 15th century tower and spire, which was partly rebuilt in 1776, being the only survivors of the medieval building. The ancient parish of Aston (known as Aston juxta Birmingham) was large. It was separated from the parish of Birmingham by AB Row, which currently exists in the Eastside of the city at just 50 yards in length. It was partly included in the borough of Birmingham in 1838, and a further part, Saltley was added in 1891. 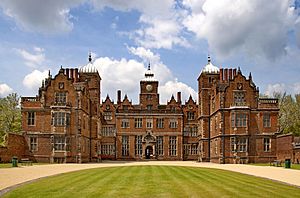 Old buildings which became popular within Aston included the Aston Hippodrome and the Bartons Arms public house. Gospel Hall on Park Lane was opened in 1892 and demolished in the 1970s to be rebuilt at the top of Park Lane in 1979. The original hall had a seating capacity of 73. Another meeting place was the Ellen Knox Memorial Hall which was next door to the Midland Vinegar Brewery. The brewery was owned by the Midland Brewery Company was built around 1877. It was located on Upper Thomas Street. The brewery was a three storey brick building with rounded corners and semi-circular windows. The roof was slated. Other industry that was located in Aston include the Premier Motor Works which produced cars during the early 20th century. The works were situated at the junction of Aston Road and Dartmouth Street. On Miller Street was a tramcar depot which had a storage capacity of 104 tramcars. It opened in 1904. 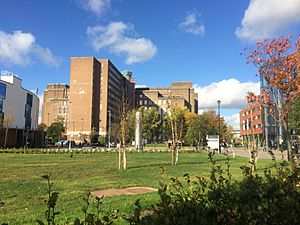 Aston University. Its campus is not in Aston but far south of Aston in Birmingham city centre.

Aston underwent large scale redevelopment following the Second World War. South Aston was designated a renewal area whilst a new town to the west of this. This became "Newtown" and is a large estate consisting of sixteen tower blocks, five of which have since been demolished. The project was approved in 1968. Three 20 storey tower blocks on the complex contained 354 flats alone. 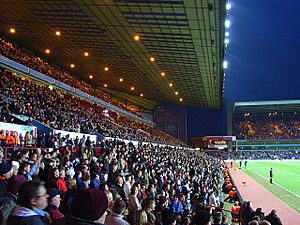 Today, Aston is famous for Aston Villa F.C. and Aston University (the campus of which is not in Aston but actually located to the far south of Aston in Birmingham city centre). Aston University is one of four universities in Birmingham. Aston Villa have played at Villa Park since 1897, and it has traditionally been one of the largest football grounds in England that has staged many notable matches at club and international level. The park has also hosted other sports and events including international level rugby league and rugby union.

Much of Aston consists of terraced houses that were built around the end of the 19th century and the beginning of the 20th century. Some of these houses were demolished in the late 1960s to make way for the Aston Expressway, which links Birmingham city centre to the M6 motorway. In the late 1950s, Aston was the location of the famous 'Venus Baby' case of Cynthia Appleton (87 Fentham Road).

By the early 1980s, Aston was suffering from severe deprivation with many of the terraced houses being outdated for the requirements of the time. Many of them lacked bathrooms and indoor toilets, whilst the vast majority were suffering from decay as a result of a lack of maintenance. There was speculation that the homes would be demolished, but Birmingham City Council made money available to the homeowners for them to be brought up to modern standards. 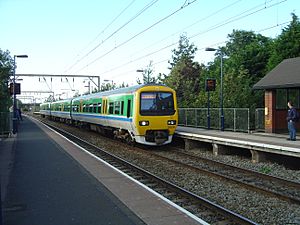 The 2001 Population Census found that 27,917 people were living in Aston with a population density of 4,185 people per km² compared with 3,649 people per km² for Birmingham. 50.4% of the population was female and 49.6% was male. This was above and below the national and city average respectively.

Aston has an area of 6.4 km²/ 451.5 hectares. Aston is a very diverse community, ethnically, with 70.6% (19,030) of the area's population being of an ethnic minority compared with 29.6% for Birmingham. 36.9% of the population was born outside the United Kingdom, over double the city average of 16.5% and nearly four times the national average of 9.3%. The largest ethnic group was Asian at 49.8%. More specifically, the Pakistani ethnic group was the largest at 27.2%. White British was the second largest ethnic group at 26.00% and Black British was third with 21.51%. The smallest broad ethnic group was Chinese and Other at 2.2%, double the city average of 1.1%. Islam was the most prominent religion in the ward with 44.3% of the ward's population stating themselves as Muslim. Christianity was the second most prominent religion in Aston at 32.4%.

The ethnic make-up of the area drastically changed in the 1950s and 1960s with immigration from the Commonwealth. Most of the immigrants were from the Indian subcontinent, though a significant number were from the Caribbean. 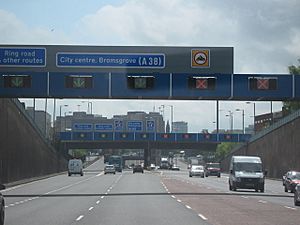 Aston Cross was once the home of Ansells Brewery and HP Sauce. The six-acre Aston site was purchased by developer Chancerygate in 2007 at £800,000 per acre, but they subsequently sold it for half that price and it now houses a distribution warehouse for East End Foods. There is a campus of City College, Birmingham there. Aston Manor Brewery was started in Thimblemill Lane in 1982 by former employees of Ansell's after Ansell's Aston Brewery closed.

From 1956 to 1969, Aston Cross was the Midlands base of television broadcaster ATV which had its Alpha Studios on Aston Road North. The ATV office building later became the studios of radio stations BRMB and XTRA-AM. Although both stations moved to Birmingham's Broad Street in the early 1990s, the building is still called Radio House. Launching in February 1974, BRMB was the UK's fourth commercial radio station and, while in Aston, was the most listened to station in the West Midlands.

All content from Kiddle encyclopedia articles (including the article images and facts) can be freely used under Attribution-ShareAlike license, unless stated otherwise. Cite this article:
Aston Facts for Kids. Kiddle Encyclopedia.