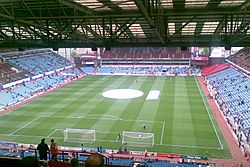 Villa Park is a football stadium in Birmingham, England. It is the current home stadium of Aston Villa. The colour of the seats are blue and claret because Villa's traditional home colours are claret and blue. The ground is located near the border between the two Birmingham inner-city suburbs of Aston and Witton, and is at the northern edge of Aston Park. The stands are called the Holte End, the Doug Ellis Stand, the Trinity Road Stand and the North Stand.

All content from Kiddle encyclopedia articles (including the article images and facts) can be freely used under Attribution-ShareAlike license, unless stated otherwise. Cite this article:
Villa Park Facts for Kids. Kiddle Encyclopedia.