The name Handsworth originates from its Saxon owner Hondes and the Old English word weorthing, meaning farm or estate. It was recorded in the Domesday Survey of 1086, as a holding of William Fitz-Ansculf, the Lord of Dudley, although at that time it would only have been a very small village surrounded by farmland and extensive woodland.

Historically in the county of Staffordshire, it remained a small village from the 13th century to the 18th century. Accommodation was built for factory workers, the village quickly grew, and in 1851, there were more than 6,000 people living in the township. In that year, work began to build St James' Church. Later St Michael's Church was built as a daughter church to St James'. In the census of 1881, the town was recorded as having approx. 32,000 residents. By the census of 1911, this had more than doubled to 68,610.

The development of the built environment was sporadic and many of Handsworth's streets display a mixture of architectural types and periods – among them some of the finest Victorian buildings in the city. Handsworth has two grammar schools – Handsworth Grammar School and King Edward VI Handsworth School (for girls). St Andrew's Church is a listed building in Oxhill Road which also held Sunday school classes in a small building on the corner of Oxhill Road and Church Lane. It also contains Handsworth Park, which in 2006 underwent a major restoration, the vibrant shopping area of Soho Road and St. Mary's Church containing the remains of the founders of the Industrial Revolution - Watt, Murdoch and Boulton. The 1901 Red Lion public house was grade II* listed in 1985, but has been empty since 2008 and is considered "at risk".

Handsworth parish was transferred from Staffordshire to Warwickshire, and became part of Birmingham, in 1911. The redbrick building with the clocktower in the photograph was originally the offices of the district council on Soho Road.

Birmingham historian Dr. Carl Chinn noted that during World War II the boundary between Handsworth and the outlying suburb of Handsworth Wood marked the line between being safe and unsafe from bombing, with Handsworth Wood being an official evacuation zone, despite being at least ten miles away from any countryside that might now qualify as "green belt" land, and being on the periphery of many "high risk" areas. During World War II, West Indians had arrived as part of the colonial war effort, where they worked in Birmingham munitions factories. In the post-war period, a rebuilding programme required much unskilled labour and Birmingham's industrial base expanded, significantly increasing the demand for both skilled and unskilled workers. During this time, there was direct recruitment for workers from the Caribbean and the area became a centre for Birmingham's Afro-Caribbean community.

A tram depot was erected near Birmingham Road, next to the border with West Bromwich, during the 1880s, and remained in use until the tram service ended in 1939. Although it has since been demolished, a replica of the depot was created later in the 20th century at the Black Country Living Museum in Dudley.

The West Indian population in Birmingham numbered over 17,000 by the 1961 census count. In addition, during this time, Indians, particularly Sikhs from the Punjab arrived in Birmingham, many of them working in the foundries and on the production lines in motor vehicle manufacturing, mostly at the Longbridge plant some 10 miles away.

By the early 1960s, there was much racial tension in the country and a great deal of this was being felt in Handsworth. 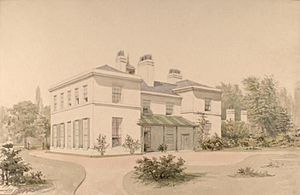 An 1835 painting of Heathfield Hall, by Allen Edward Everitt

Matthew Boulton's Soho Manufactory was set up on the northern edge of Handsworth, on Handsworth Heath. It operated from 1766-1848 and was demolished in 1863. Boulton commissioned Samuel Wyatt to design his nearby house Soho House, which is now a museum.

In 1790, Heathfield Hall, also designed by Wyatt, was built for Boulton's business partner, the engineer James Watt. Watt died in the house in 1819, and was buried at nearby St Mary's Church. In the 1880s engineer George Tangye bought the hall and lived there until his death in 1920. From 1927 the hall was demolished and the lands redeveloped. What was the Heathfield Estate is now the land that comprises West Drive and North Drive. Watt's workshop from the house was dismantled and rebuilt in the Science Museum, London.

The tenor Webster Booth was born in Handsworth in 1902, and began his singing career as a child chorister at the local parish church of St. Mary's. Together with his duettist wife Anne Ziegler, he became a mainstay of West End musicals and World War II musical films. A BBC Showbiz Hall of Fame article described him as "possessing one of the finest English tenor voices of the twentieth century."

The Birmingham Canal Navigations Main Line Canal passes through the area, as does the former London, Midland & Scottish Railway main line between Birmingham and Wolverhampton. The West Midlands Metro has a stop at Handsworth Booth Street. The area is also served by National Express West Midlands bus services 11A, 11C, 16, 74 & 101.

All content from Kiddle encyclopedia articles (including the article images and facts) can be freely used under Attribution-ShareAlike license, unless stated otherwise. Cite this article:
Handsworth, West Midlands Facts for Kids. Kiddle Encyclopedia.