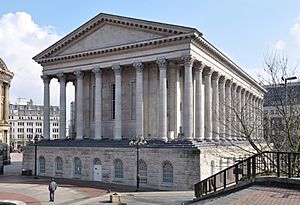 Birmingham Town Hall where the festival was held from 1837 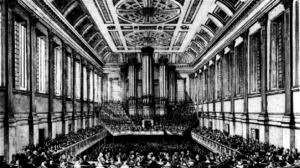 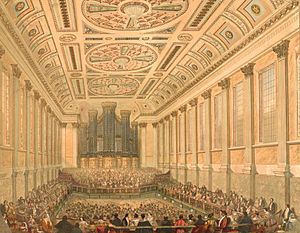 The Birmingham Triennial Musical Festival was a festival of classical music that used to be held in Birmingham, England. It was started in 1784 and continued until 1912. “Triennial” means that it happened once every three years.

From September 1784 the festival was held every three years. It continued to raise money for the hospital.

The church and theatre where the festival was held became too small, so in 1834 they built Birmingham Town Hall which had much more room.

Many famous musicians performed at the festival. In 1837 Felix Mendelssohn conducted a performance of his oratorio St. Paul, played the organ, and played the piano part in the first performance of his Piano Concerto No. 2 which had been especially commissioned by the Festival. In the next festival he played his Piano Concerto No. 1. In 1846 (a year before he died) the festival commissioned him to write his oratorio Elijah. It was a huge success. He was paid 200 guineas. Elijah was played at every festival after that.

The great conductor Hans Richter was made principal conductor in 1885.

Edward Elgar wrote several works for the festival. In 1900 his oratorio The Dream of Gerontius was given its first performance. In 1903 he performed The Apostles, and 1906 The Kingdom. In 1912 he wrote The Music Makers. The principal conductor for 1912 was Henry Wood.

The 1909 and 1912 festivals lost a lot of money and they could not give any money to the hospital. This was soon followed by World War I, so the festival stopped and did not continue after the war.

All content from Kiddle encyclopedia articles (including the article images and facts) can be freely used under Attribution-ShareAlike license, unless stated otherwise. Cite this article:
Birmingham Triennial Music Festival Facts for Kids. Kiddle Encyclopedia.